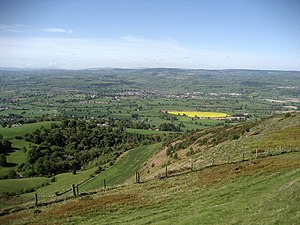 View over Vale of Clwyd taken from the Offa's Dyke Path near Bwlch Penbarra, showing excellent views over the Vale of Clwyd and the town of Ruthin. Snowdonia is also just visible over 35 miles away.

The Vale of Clwyd is a tract of low-lying ground in Denbighshire and Flintshire. The Vale extends south-south-westwards from the coast of the Irish Sea for some 20 miles forming a triangle of low ground bounded on its eastern side by the well-defined scarp of the Clwydian Range and to the west by numerous low hills. The River Clwyd, which rises within Clocaenog Forest on the bounds of Merionethshire, runs the full length of the vale, forming the border between the the counties of Denbigh and Flint in places. It is joined by the two major left-bank tributaries of the River Clywedog and River Elwy and the smaller right-bank tributary of the River Wheeler.

At its seaward end are the coastal resorts of Kinmel Bay, Rhyl and Prestatyn whilst the towns of Abergele and St Asaph lie just inland. The other principal towns of the vale are Denbigh and Ruthin.[1]

The Vale of Clwyd is a sedimentary basin which takes the form of a half-graben whose eastern margin is marked by the Vale of Clwyd fault (geology)|Fault]]. Like the Cheshire Basin further to its east, it is mostly floored by thick deposits of Permian and Triassic sandstone. Around St Asaph, late-Carboniferous Coal Measures, mudstones and sandstones occur. The area was overrun by ice during the ice ages whose legacy is a covering of glacial till across the area and a swarm of drumlins along the western edge of the vale. Alluvium is encountered across the [loodplains of the River Clwyd and its tributaries.[2]