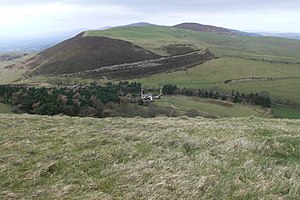 View across the Clwydian Hills 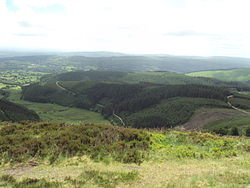 The Clwydian Hills or Clwydian Range (Welsh: Bryniau Clwyd) are a series of hills spread across the bounds of Denbighshire and Flintshire which run from Llandegla in the south to Prestatyn in the north. The highest point is Moel Famau, a popular hill to visit and which is the county top or Flintshire. They are named after the River Clwyd in Denbighshire, whose Vale marks the western edge of the hills.

The whole range is designated as an area of outstanding natural beauty. The relevant bureaucrats intent to extend the designated area soon beyond the Clwydian Hills to include the Dee Valley around Llangollen and Horseshoe Pass.

The summits of these hills provide extensive views westward to the high peaks of Snowdonia in Caernarfonshire, eastwards across the Cheshire Plain to the Peak District in Derbyshire and northeast towards Manchester and Liverpool in Lancashire.

The Clwydian Hills are formed from an upstanding block of Silurian age sandstones, mudstones and siltstones. The range's rocks are intensely fault (geology)|faulted; the major Vale of Clwyd Fault is responsible for the impressive west-facing scarp of the Clwydian Range. It downthrows the rocks to the west and separates the younger Carboniferous and Permo-Triassic rocks of the Vale of Clwyd from those of the hills.[1]

The range includes a number of hills possessing Iron Age hill forts, including (from the north):

There are, as with many places in the west of Britain, a number of legends associated with King Arthur surrounding these hills.

There are in addition a number of tumuli and cairns which adorn these hills. 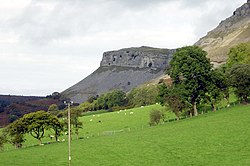 A wide range of wildlife thrives in the Range, including the red kite. The red fox is also spotted from time to time. They both prey on rabbits and voles.

Moel Famau is the focus of a country park established in the range and where both parking and picnic facilities have been provided.