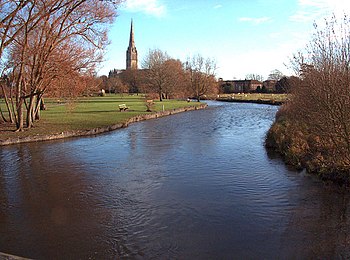 The River Avon in Salisbury

The River Avon, one of several of the same name, is a river in Wiltshire and Hampshire which flows south to the sea in Christchurch Harbour.

The Avon has its source in Wiltshire and is the main river in the city of Salisbury, watering that city's extensive meadows behind the Cathedral. Below Salisbury it enters Hampshire and flows through that county due south to the English Channel.

The Avon is one of the rivers in the British Isles in which the phenomenon of anchor ice has been observed.[1] The Avon is thought to contain more species of fish than any other river in Britain.[2]

The name "Avon" belongs to several rivers in the British Isles, of which the best known are the Somerset Avon, as the river of Bath and Bristol, the Warwickshire Avon as the river of Stratford-upon-Avon, and the Hampshire Avon in Salisbury.

The name "Avon" is from Old Welsh, and simply means "River"; the modern Welsh for river is afon, pronounced "av-on".

About half of the length of the river is within Wiltshire and the rest in Hampshire. It is one of two sizable rivers by the name of Avon in Wiltshire; thus this river is sometimes known as the Salisbury Avon or the Hampshire Avon in order to distinguish it from the various other rivers of that name in the British Isles.

The Avon begins as two separate rivers. The western Avon rises to the east of Devizes, draining the Vale of Pewsey, while the eastern Avon rises just east of Pewsey. These two merge at Upavon, flowing southwards across Salisbury Plain through Durrington, Amesbury and Salisbury.

All the significant direct and indirect tributaries of the Avon, including the Nadder, Wylye, Bourne and Ebble, converge within a short distance around Salisbury.

The Avon flows along the western edge of the New Forest through Fordingbridge and Ringwood, joined by the river Stour at Christchurch, to flow into Christchurch Harbour and the English Channel at Mudeford.

The Avon Valley Path follows parallel to the river from Salisbury to Christchurch. 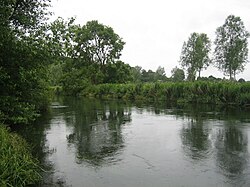 The Avon near Fordingbridge

In 1664 under King Charles II, Parliament passed an "Act for making the River Avon navigable from Christchurch to the city of New Sarum". Canoeists have seized upon this Act seeking to prove a lawful right to use the Avon.[3]

Towns and villages along the river

There is also a sister project called Living River which runs from 2006 to 2010. This is providing better access and recreation, as well as biodiversity.[7]