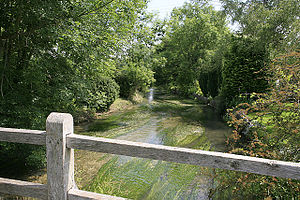 The River Ebble is one of the five rivers of the city of Salisbury in Wiltshire. Rising at Alvediston to the west of the city, it joins the River Avon at Bodenham, near Nunton.

The Ebble rises at Alvediston, 12 miles to the west of Salisbury. It joins the River Avon two and a half miles south-east of the city at Bodenham after flowing through Ebbesbourne Wake, Fifield Bavant, Little London, Knapp, Mount Sorrel, Broad Chalke, Stoke Farthing, Bishopstone, Stratford Tony, Coombe Bissett, Odstock and Nunton.

The River Chalke is the most significant tributary, rising in Bowerchalke and flowing through the Chalke Valley to join the Ebble at Mount Sorrel in Broad Chalke. The Chalke also provides a steady, year round flow, so that the winterbourne section of the Ebble is only from Alvediston to Knapp.

The flow of the Ebble is augmented at Little London by several pumped boreholes that feed the extensive commercial watercress farm at Knapp before the confluence with the Chalke.

In the book Ebbesbourne Wake Through The Ages historian Peter Meers surmised that the land and the bourne (river) was once owned by a man called Ebbel. He also identified that from Saxon times until 1166 there were two villages called Ebblesborne, one of which then became known as Bishopstone.[1] Note that the word "bourne" is derived from the Old English "brunna".[2]