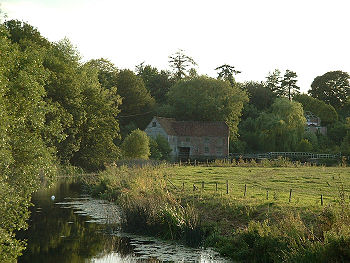 The River Stour is a river 60 miles long which flows through Wiltshire, Dorset and Hampshire and drains into the English Channel at Christchurch. It is sometimes called the Dorset Stour to distinguish it from the several other rivers named Stour.

The source of the Stour is at Stourhead, in Wiltshire, where it forms a series of artificial lakes which are part of the Stourhead estate owned by the National Trust. It flows south into Dorset through the Blackmore Vale and the towns of Gillingham and Sturminster Newton.

Below Wimbourne minster the Stour soon enters Hampshire and flows, through a series of sudden swings east and south, it reaches its estuary at Christchurch. It forms a joint estuary with the River Avon which expands into Christchurch Harbour and thence into the English Channel.

The Stour Valley Way is a designated long-distance footpath that follows almost all of the course of the river.

For many miles the river is followed by the route of the now disused Somerset and Dorset Joint Railway, which bridged the river five times.

Because much of the river's course is across clay soil, the river's waterlevel varies greatly. In summer, low water level makes the river a diverse and important habitat, supporting many rare plants. In winter, the river often floods, and is therefore bordered by wide and fertile flood plains.

Towns on the Stour

Several of towns and villages in Dorset are named after the river, including East Stour, West Stour, Stourpaine, Stourton Caundle, Stour Row, Stour Provost, Sturminster Newton, and Sturminster Marshall. Sturminster Newton is famous for its water mill and town bridge, which still bears the notice warning potential vandals that damaging the bridge is punishable by penal transportation.

The Stour passing under Crawford Bridge
Retrieved from "https://wikishire.co.uk/w/index.php?title=River_Stour,_Dorset&oldid=47457"
Categories: