From Wikishire
Jump to: navigation, search
Not to be confused with Pusey in Berkshire

Pewsey is a large picturesque village, at the centre of the Vale of Pewsey in Wiltshire.

The village is regarded as 'the gateway to the West Country' but is also well connected to London, with the West Country and Glamorgan being close to the M4 motorway and the A303 by way of the A345 which crosses the village. Additionally, the village is served by Pewsey railway station on the London to Taunton line. For this reason Pewsey is popular location for commuters whilst maintaining its traditional Wiltshire village charm with a wide range of artisans, crafts and tradesmen in and around the area. 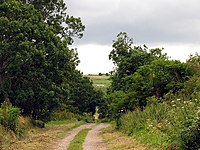 Green Drove, Pewsey, with the Pewsey White Horse ahead

Archaeological excavations on Pewsey Hill show evidence of a settlement in the 6th century. In the Tudor era the Manor of Pewsey belonged to the Duchess of Somerset. Several of the village's houses were built in this era: the timber framed cruck house at Ball Corner, Bridge Cottage on the Avon and the Court House by the Church.

In 1764 the founder of the Methodist movement John Wesley (1703–1791) preached at Pewsey's Church of England parish church. The rector at that time, Joseph Townsend, was responsible for building of the first bridge over the River Avon.

The Kennet and Avon Canal reached Pewsey in 1810. Of more significant lasting effect for the village was the arrival of the Great Western Railway in 1862 which allowed fast travel to London and to the West of Pewsey.

In 1898 Pewsey Carnival was first held, a tradition that flourishes today, a fortnight of events, including The Feaste, culminating in an Illuminated Procession in mid to late September.

The Pewsey white horse hill figure is located on a steep slope of Pewsey Hill (51°19’16"N, 1°45’24"W) about a mile south of the village and can be viewed from several places in the surrounding area.

The horse was cut in 1937 and is one of the smaller Wiltshire white horses. It replaces an earlier one which was possibly cut in 1785. It can be seen from Milk Hill, the location of the bigger Alton Barnes White Horse.

Pewsey has a thriving economy and many independent 'home' retailers. These include two interior designers, two picture framers, one independent carpet shop, two cabinet makers, one oriental furniture maker, one art gallery and one jewellery seller.

The village has in addition to its scatter of local shops, doctors, two dentists, osteopath, numerous hairdressers and beauticians, a restaurant/wine bar, three pubs, one curry house, one Chinese take-away and one kebab shop.

A prominent statue of King Alfred the Great, King of Wessex and a local landowner, stands in the middle of the village.

Pewsey is the centre of activity for many of the smaller villages in and around the Vale of Pewsey and, as such, offers a wide range of activities for its small size. Such as ballooning, shooting, climbing, gliding, Martial Arts, angling, paragliding and many other leisure activities.

Pewsey Music Festival, established in 2007, is an annual celebration of live music held each August in Cooper's Field, behind the historic Cooper's Arms pub. Performers have included Nick Harper, Jon Amor, Lyla Foy, Will and The People, Mick Quinn and Legs Larry Smith.

PACT - Pewsey Area Community Trust - is a group of local people and organisations supported by the County and Parish Councils who are interested in improving the economic, social and environmental well-being of the Pewsey area. The group has its own constitution and can apply for funding from various bodies to carry out projects which will achieve the group's goals or to deliver the objectives stated in the Pewsey Community Area Plan.

In 2014, the parish council established a flag for Pewsey. It shows the rounded hills close to the village and the Pewsey White Horse. A crown of oak leaves recalls King Alfred's ownership of the manor, and loal oak trees.