Gisburn (formerly Gisburne) is a village and parish within the Staincliffe Wapentake of the West Riding of Yorkshire. It lies eight miles north-east of Clitheroe and 11 miles west of Skipton. The civil parish had a population of 506, recorded in the 2001 census,[2] increasing to 521 at the 2011 Census.[1]

The former spelling of Gisburne was phased out after the introduction of railways in the parish. Gisburn railway station was closed under the Beeching Axe in 1962. Gisburne and similar spellings were also sometimes used for Guisborough, also in Yorkshire, leading to Gisburn often being referred to as "Gisburn in Craven".

The civil parish adjoins those of Bracewell and Brogden, Horton, Paythorne, Sawley and Rimington.

The old Roman road from Ribchester to Ilkley passes to the south of the modern civil parish, with the remains of a 4th-century Romano-British farmstead known as Bomber Camp located just over the boundary with Bracewell and Brogden.[3]

The layout of this linear village, with properties facing the main street and tenement plots running down to a back lane, is common of many established in the tenth century.[4]

In 1612 a village resident, Jennet Preston, was tried at the Lancashire witch trials, accused of causing the death of Thomas Lister by witchcraft. Her trial took place in York as the village then lay within Yorkshire. Preston was found guilty and was hanged at York Knavesmire.

Markets where held on Main Street until 1911, when the livestock market moved to its present site at the western end of the village next to the former railway station.[4]

In summer 2010, the village controversially featured in a television advertisement for the Renault Mégane.[5]

Gisburn is the centre of a large ancient parish, which also includes the townships of Gisburn Forest, Paythorne, Newsholme, Horton, Rimington, Middop, Nappa and Swinden.[6] All these townships became separate civil parishes in 1866.[7]

In 1759 Gisburn established the first place of Methodist worship in the district. On 18 April 1784 John Wesley, then aged 81, preached to a large congregation. The original Methodist chapel on Mill Lane later became part of the village smithy. A new chapel was built in 1871 but closed in 1948 due to falling attendance. The building was then used as a garage and is now the site of three houses known as "The Old Chapel".[8]

Gisburn is a rural area, surrounded by hilly and relatively unpopulated areas, with Bowland Forest to the west, Pendle Hill to the south, and the Yorkshire Dales and Pennines not far to the north and east. The relatively flat Ribble valley runs through the parish with the A59 running parallel.

The Pennine Bridleway National Trail and Ribble Way pass through the parish, with former crossing Gisburne Park and the latter following roads through the village. [9][10] 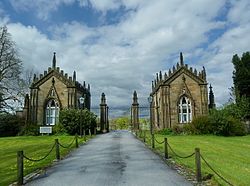 The entrance to Gisburne Park

To the north of the village, between it and the River Ribble is a 168-acre 18th-century former deer park and country house, today used as a private hospital, equestrian centre and the Ribblesdale Holiday Park.

The present Grade-I-listed house, was originally constructed between 1727 and 1736 by Thomas Lister and has been since extended. The Lister family produced a number of Members of Parliament for Clitheroe and later Barons Ribblesdale, and had been previously based at Arnoldsbiggin (Westby Hall). Although the Manor of Gisburne was first acquired by the Lister's in 1614, the family only moved to this site, then called Lower Hall, in 1706. In the mid-18th century, the park was roamed by wild white cattle and deer, and the estate continues outside it, with an unusual tree nursery enclosure known as the ‘Great Nursery' situated on Coppy Hill to the west. The park is listed in the Register of Historic Parks and Gardens and contains a number of notable buildings including the gate lodges at the principal entrance from the village which are listed Grade II*.[11]

The Church of St Mary the Virgin 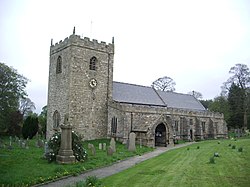 The ancient church at the centre of the village is dedicated to St Mary the Virgin. It is thought, however, that at one time it also had a dedication to St Andrew, possibly as a deliberate means of avoiding the displeasure of invading Scots. A more likely explanation lies with the one time patrons of the living, the prioress and nuns from Stainfield Nunnery[12] in Lincolnshire, which was itself dedicated to St Mary the Virgin and St Andrew. Indeed, the prioress had a manor house at Rayhead in Gisburn Forest, and the Percy family, who founded the nunnery, were very generous to Gisburn Church. The connection with Stainfield, however, was the source of a bitter dispute between the nunnery and the nearby Sawley Abbey.[8]

Early charters give the priest of Gisburn, between 1140 and 1146, as one Renulf, and it has been suggested that the foundations of the church date from 1135. The large cylindrical pillars at the front of the church are of 12th-century origin. The date of the other pillars is later, perhaps as late as the 16th century, when it is thought that the church was restored. Part of the archway originated from Sawley Abbey following its destruction at the Dissolution. A further restoration in 1872 involved re-roofing the church, new pews and a new pulpit. Other modifications were also carried out and the work was paid for by a grant from Queen Anne's Bounty, the repayment of which took until 1925.

In the graveyard lies buried one of England's greatest writers of hymn tunes, Francis Duckworth (1862–1941). His most famous tune is "Rimington", to which several hymns including Jesu Shall Reign Where'er the Sun may be sung. The opening lines of the tune are inscribed on his gravestone.[13]

The church is a Grade-II* listed building. The south porch has a wide outer entrance with moulded round arch and moulded imposts. The inner door, probably C13th, has a pointed arch with two orders of sunk quadrant moulding. The porch roof has two short king posts rising from collars.[14]