Byland Abbey is a ruined abbey and a small village in the North Riding of Yorkshire, and within the North York Moors National Park.

Byland was founded as a Savigniac abbey in January 1135 and was absorbed by the Cistercian order in 1147. The community had a troubled start: they had had to move five times before settling at New Byland, near Coxwold in 1177. Its early history was marked by disputes with no fewer than four other religious establishments: Furness Abbey, Calder Abbey, Rievaulx Abbey and Newburgh Priory.

However, once it had overcome this bad start, Byland Abbey was described in the late 14th century as "one of the three shining lights of the north". Its financial success was not as great as that of places like Rievaulx, but it was famed for its sheep rearing and wool exports. Its church was said to be among the finest 12th-century churches in Europe.

Byland Abbey was dissolved on 30 November 1538 as part of the Dissolutio of the Monasteries. In 1539, its site was granted to Sir William Pickering. 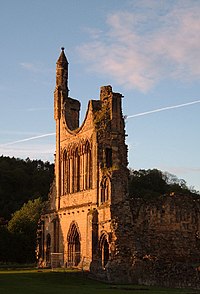 The impressive remains of the abbey are today in the care of English Heritage.

The ruins include the lower half of a huge rose window. An interesting feature is the preservation of some of the brightly coloured mediæval floor tiles. An altar table was also recovered, although that is now in Ampleforth, and a stone lectern base from the chapter house is the only example of its kind in Britain.[1] 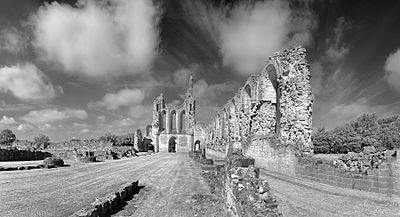