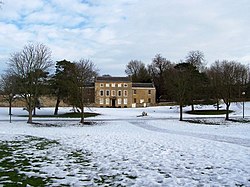 Great Linford is a village and parish in the Newport Hundred of Buckinghamshire that now forms a suburb in the northern part of Milton Keynes, between Wolverton and Newport Pagnell.

Great Linford was one of the North Buckinghamshire villages incorporated into Milton Keynes at its designation in 1967.

Written as Great Linford to distinguish it from the even tinier Little Linford, the village is another on the Grand Union Canal. The name Linford is thought to derive from the crossing point over the River Ouse which now separates Great Linford from Little Linford to the north, where there were linden trees. The first reference to Linford occurs in 944, when "King Edmund gave to his thegn Aelfheah, land at Linforda with liberty to leave it to whom he wished"; it appears in the Domesday Book as Linforda.[2] Today, the outer buildings of the seventeenth-century Linford Manor form an Arts Centre, and the house itself is a recording studio.

In the early sixteenth century, the rector of this parish Dr Richard Napier was widely known as a medical practitioner, astrologer and curer of souls.[3] He was referred to by many in the upper classes, including the Earl of Sunderland who lived under his care for some time in 1629.[4]

Between 1817 and 1864 the village was the site of the junction between the Newport Pagnell Canal and the Grand Junction Canal.[5]

For a hundred years (1867 to 1967) Great Linford was served by Great Linford railway station on the Wolverton to Newport Pagnell branch line.

St Andrews C. of E. Infant School, on the High Street, founded in 1901, has survived various threats of closure from the local education authorities. The school was also home to Sir William Pritchard in the later part of that century, who was president of St Bartholomew's Hospital in London. He founded almshouses in Great Linford, which are still there today. As part of the development of Great Linford's integration into Milton Keynes, a new primary and middle school was opened in 1977, originally known as Great Linford County Combined School, and more recently as Great Linford Primary School.

The parish church of Saint Andrew is a Grade-II* listed building[6] and dates from 1215.[7]

Great Linford has two pubs: The Nag's Head, on the High Street and The Black Horse at the edge of Great Linford, by the Grand Union Canal.

The former stables and associated gate houses are now an Arts Centre.[9] The former almshouses beside the stables are now used as artists' studios.

The parish is bounded to the north by Newport Road, to the west by the B4034/V8 Marlborough Street (as far as H4 Dansteed Way), then along Dansteed Way as far as V7 Saxon Street, south along Saxon Street as far as the A509/H5 Portway, then east along Portway to the M1, then north along the motorway until it reaches Newport Road again. The Grand Union Canal bisects the parish.