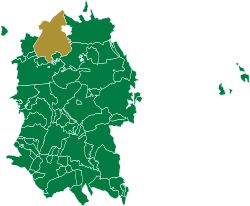 Malmesbury Hundred is one of the hundreds of Wiltshire, named after the town of Malmesbury, which it contains. It is situated in the north of the county, adjacent to the border with Gloucestershire. It is bounded to the east by Highworth, Cricklade and Staple hundred; to the south-east by Kingsbridge Hundred; to the south and west by North Damerham and Chippenham Hundreds; and to the north by Gloucestershire. The parish of Minety forms, for the most part a detached part of Gloucestershire, although a small part forms part of Malmesbury hundred. The population in 2011 was 18,631, rising to 20,028 if detached parts are disregarded.

*: Extends into Chippenham hundred.
†: Mostly in Crowthorne and Minety hundred in Gloucestershire.