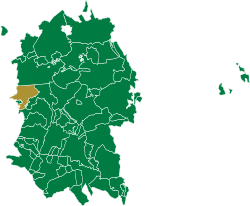 Bradford Hundred is one of the hundreds of Wiltshire, named after the town of Bradford-on-Avon, which it contains. It is situated in the west of the county, adjacent to the border with Somerset. It is bounded to the north by Chippenham Hundred; to the east by Melksham Hundred; to the south by Whorwelsdown hundred; and to the west by Somerset. The parish of Westwood forms a detached part of Elstub and Everley within Bradford Hundred. It had a population of 18,783 in 2011.