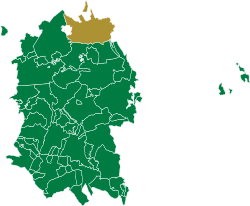 Highworth, Cricklade and Staple is one of the hundreds of Wiltshire, situated in the north of the county, adjacent to the borders with Gloucestershire and Berkshire. It is bounded to the north by Gloucestershire; to the east by Berkshire; to the south by Kingsbridge Hundred; and to the west by Malmesbury Hundred. There is a very short border with Elstub and Everley to the south-east. Additionally, the parish of Poulton forms a detached part of Highworth, Cricklade and Staple Hundred and Wiltshire, locally in Gloucestershire. Containing the northern suburbs of Swindon, the population in 2011 was 121,380, falling to 120,965 if detached parts are disregarded.