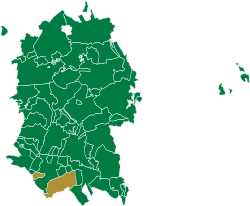 Chalk is one of the hundreds of Wiltshire, situated in the south of the county, adjacent to the border with Dorset. It is bounded to the west and north-west by Dunworth Hundred; to the north by parts of Cawden and Cadworth and South Damerham Hundreds; to the south-east by South Damerham; and to the south by Dorset. It had a total population of 2,299 in 2011.