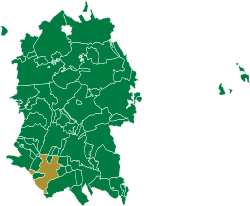 Dunworth is one of the hundreds of Wiltshire, situated in the south of the county, adjacent to the border with Dorset. It is bounded to the west by part of Downton Hundred; to the north by Heytesbury Hundred and parts of Branch and Dole and Elstub and Everley; to the north-east and north-west by Warminster Hundred; to the east by part of Cawden and Cadworth; to the south-east by Chalk Hundred; and to the south by Dorset. It had a total population of 5,834 in 2011.