Syon House, and its 200-acre park, Syon Park, is in the parish of Isleworth in south-western Middlesex. It belongs to the Duke of Northumberland and is now his family's residence close to London.

The house was built as a country house for the Dukes of Somerset and Dukes of Northumberland long before the metropolis overspread the fields of Middlesex this far out from London and the park maintains the country aspect though hedgesd about on all sides with the urban and suburb townscape.

The eclectic interior of the house was designed by the architect Robert Adam in the 1760s.[1] 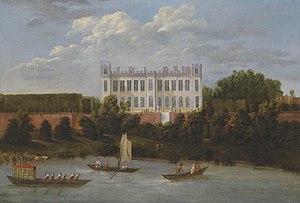 Syon House before the 1760s

Syon House derives its name from Syon Abbey, a mediæval monastery of the Bridgettine Order, founded in 1415 on a nearby site by King Henry V. The Abbey moved to the site now occupied by Syon House in 1431. It was one of the wealthiest nunneries in the country. (A local legend tells that the monks of Sheen Priory had a tunnel running to the nunnery at Syon;[2] as will almost all such "secret tunnel" legends, the idea of a connubial tunnel miles long and under the River Thames is but a naughty myth,

In 1539, the abbey was closed by royal agents during the Dissolution of the Monasteries and the monastic community was expelled.[3] 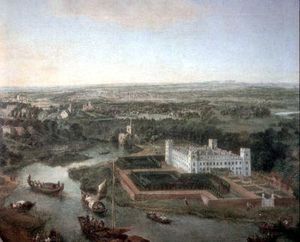 After the closure of the abbey, Syon became the property of the Crown. In 1541 and part of the following year, Henry VIII's fifth wife, Catherine Howard, was brought to Syon for her long imprisonment. In February 1542, she was taken to the Tower of London and executed on charges of adultery. Five years later when King Henry VIII died, his coffin was brought to Syon on its way to be buried in Windsor.

Soon Syon came into the possession of the 1st Duke of Somerset, who had Syon built in the Italian Renaissance style before his death in 1552. In 1557 Bloody mary proposed to return Syon to its original purpose as an abbey, but this idea was short lived. Syon was acquired in 1594 by Henry Percy, 9th Earl of Northumberland (1564-1632), and has remained in his family ever since.[4]

In the late 17th century, Syon had come back to the Seymours, in the hands of Charles Seymour, 6th Duke of Somerset, through his wife, Elizabeth Seymour (née Percy). In 1692, Princess Anne (later Queen Anne) came to live at Syon after her sister, Queen Mary II, expelled her from the Palace of Whitehall after a disagreement. Anne gave birth to a stillborn child there.

In the 18th century, Hugh Smithson married the Seymour heiress, changed his name to Percy and became the 1st Duke of Northumberland. He commissioned architect and interior designer Robert Adam and landscape designer Lancelot "Capability" Brown to redesign the house and estate. Work began on the interior reconstruction project in 1762. Five large rooms on the west, south and east sides of the House, were completed before work ceased in 1769. A central rotunda, which Adams had intended for the interior courtyard space, was not implemented, due to cost.[5]

In 1951 the Syon house was opened to the public for the first time under the 10th Duke and Duchess. Later, in 1995 under the 12th Duke, the family rooms became open to the public as well. As the Percy family continues to live there, they continue to enhance the house. Most recently the Duchess added a new central courtyard with the design of Marchioness of Salisbury.[6]

A restoration was undertaken in late 2007, primarily involving work to the roof area.[7][8] In 2008 restoration work commenced on the Great Hall and a current long-term project is to restore the Adams Rooms[9]

A design by Adam for a Bridge at Syon Park

The well known "Adam style" is said to have begun with Syon House. It was commissioned to be built in the Neo-classical style, which was fulfilled, but Adam's eclectic style went further: Syon is filled with multiple styles and inspirations including a huge influence of Roman antiquity, highly visible Romantic, Picturesque, Baroque and Mannerist styles and a dash of Gothic. There is also evidence in his decorative motifs of his influence by Pompeii that he received while studying in Italy.[1] Adam's plan of Syon House included a complete set of rooms on the main floor, a domed rotunda with a circular inner colonnade meant for the main courtyard(meant for meaning that this rotunda was not built due to a lack of funds), five main rooms on the west, east and south side of the building, a pillared ante-room famous for its colour,[10] a Great Hall, a grand staircase(though not built as grand as originally designed) and a Long Gallery stretching 136 feet long. Adam's most famous addition is the suite of state rooms and as such they remain exactly as they were built.

More specific to the interior of Adam's rooms is where the elaborate detail and colour shines through. Adam added detailed marble chimneypieces, shuttering doors and doorways in the Drawing Room, along with fluted columns with Corinthian capitals. The long gallery, which is about 14 feet high and 14 feet wide, contains many recesses and niches into the thick wall for books along with rich and light decoration and stucco-covered walls and ceiling. At the end of the gallery is a closet with a domed circle supported by eight columns; halfway through the columns is a doorway imitating a niche.[6]

In the 1820s the north range of the house that was not completed by Adam was reshaped by the 3rd Duke. At this time the house was also refaced in Bath stone and the porch rebuilt. This remodelling is thought to have been done by the architect Thomas Cady, who had worked on previous estates belonging to the Percy family.[6]

The Syon House was refurbished again in the 1860s. The 4th Duke had Renaissance-style plaster ceilings put into the Family Drawing Room, Family Dining Room and Print Room.[4]

Syon Park borders the River Thames, looking across the river to Kew Gardens and near its banks is a tidal meadow flooded twice a day by the river. It contains more than 200 species of rare trees.

Although the park and lake were designed by Capability Brown in 1760, their character today is nineteenth century. The circular pool has a copy of Giambologna's Mercury. The park and the house in the background were painted from across the Thames by J. M. W. Turner c.1802-10 in the painting Zion House, Isleworth and in two capriccios in 1805.[11][12]

The Great Conservatory in the gardens, designed by Charles Fowler in 1820's [13] and completed in 1827, was the first conservatory to be built from metal and glass on a large scale.

Henry Percy, 11th Duke of Northumberland, who was head of the family from 1988 to 1995, was noted for planting many trees in the grounds of Syon.

The London Butterfly House was based in the grounds of Syon Park from 1981 until its closure on 28 October 2007 due to the Duke of Northumberland's plans to build a hotel complex on the land.[14]

Also based in the grounds of Syon Park was the Heritage Motor Museum, a collection of vintage automobiles, which was also founded in 1981. Owing to a major increase in the number of vehicles acquired, in 1993 the museum closed and its collection was transferred to the Heritage Motor Centre at Gaydon in Warwickshire.[15]

In 2004, planning permission was granted for the deluxe £35-million Radisson Edwardian Hotel,[16] but this was not built.

In 2002 an annual archaeological dig was initiated originally by the Channel 4 television Time Team programme, to excavate the remains of the lost abbey, the annual dig is now undertaken by Birkbeck College part of the University of London The annual dig is back up by a permanent exhibition in the undercroft[9] In November 2010, the results from an archaeological dig made two years before on the site of the new hotel were reported, with the excavations uncovering the remains of a Roman village that existed in what was then the rural outskirts of Londinium. Artefacts uncovered included 11,500 pottery fragments, 100 coins and pieces of jewellery. Some of the finds remain unexplained, such as the discovery of skeletons "buried in ditches placed on their side". Although the skeletons date from the Roman period, this burial practice was said by the senior archaeologist to be "more suggestive of unknown prehistoric rites than Roman practice".[17]

Syon Park is a Site of Special Scientific Interest.[18][19]