Shirehampton is a village in Gloucestershire that forms a suburb at the north-western edge of Bristol. It retains something of its village feel, having a short identifiable High Street with the parish church situated among shops. Although located on the far north-west corner and largely separated from the rest of Bristol by a large swathe of parkland extending from the Blaise Castle estate with the River Avon forming a mild barrier for access to Somerset the community is still a convenient location from which to reach all parts of the city and its work environment.

Travel is also easy from Shirehampton into the rest of Gloucestershire, Monmouthshire and Somerset since it lies within easy reach of all the main motorways in the area, including the M5, the M4 Severn bridges, and the M49, and it is served by the A4 Portway and by Shirehampton railway station, which allow access to near the city centre. It is informally known to local people as "Shire", which is also the title of the monthly community newspaper and website.

Shirehampton looks across the Avon towards the rural Failand Hills of Somerset. For many centuries the only direct connection with Somerset was via a small rowed ferry which crossed from near The Lamplighters pub ("The Lamps") to the village of Pill, Somerset opposite. This state of affairs continued until the completion of the M5 Avonmouth Bridge in 1974. From the limestone ridge of Penpole Point (meaning 'Land's End' in the Celtic language spoken here before English), there used to be extensive and far-reaching views across the River Severn to the distant hills of South Wales, but tree growth has restricted this once spectacular prospect.

The gravel terraces above the River Avon provide some of the earliest evidence of human occupation in the British Isles. Here and around Ham Green and Pill, on the opposite bank of the Avon, humans with a Lower Palaeolithic (earliest phase of the Old Stone Age) culture (possibly of the hominid type Homo heidelbergensis) left tools and debris behind at an uncertain time some 250–400,000 years ago.[1] For comparison, the well-known Palaeolithic sites at Waverley Wood, Warwickshire, and Boxgrove Quarry, Sussex, have artefacts from about 500,000 years ago, and Boxgrove has yielded bones of H. heidelbergensis.

Shirehampton originates as a detached part of the parish of Westbury-on-Trym, separated from the main part of Westbury by a part of Henbury parish, which included Kingsweston, the great house, King's Weston House whose inhabitants have had a considerable impact on Shirehampton as employers and benefactors. The area is on record as part of the estate of "Stoke", which was granted by King Offa of Mercia to the bishop of Worcester in about 795, along with the district that is now called Stoke Bishop, and there are two later Anglo-Saxon documents about the same pieces of land.[2][3]

The place was originally called simply Hampton, meaning 'large farming estate' or 'farm enclosed on several sides', and later became known as 'sharny Hampton', meaning 'dungy Hampton'. The name was "cleaned up" in Elizabethan times to its current form.[4]

The village grew up around the lowest safe river crossing on the river Avon before it empties into the Severn. The ferry between the villages of Pill, Somerset and Shirehampton connects a ridgeway along Kingsweston Hill (sometimes now called Abbot's Way) with the hills beyond the Avon and continues on towards Clevedon. The ferry ran continuously until 1974, when it was superseded by the M5 bridge.

A priory of the Benedictine abbey of St Mary, Cormeilles, in Normandy, is sometimes said to have been established at Shirehampton in the early Middle Ages, and the converted fifteenth-century tithe barn in the High Street is believed to have belonged to the monastic estate. However, the place referred to in Domesday Book is certain to have been Kyre in Worcestershire, and there is no real connection between Shirehampton and Cormeilles apart from the building stones exchanged by the two communities in 1963 on the strength of the supposed historical connection.

The development of Shirehampton throughout the eighteenth century is closely associated with the history of the adjacent King's Weston House and its extensive estate. Much of the surrounding area was in the ownership of the Southwell family, owners of King's Weston and later to receive the title of Baron de Clifford. Shirehampton prospered through tourism as sightseers from Bath, Clifton and Bristol's Hotwells came to view Kings Weston and the famous views from Penpole Point.

Shirehampton became ecclesiastically separate in 1844 when the chapel of ease of St Mary, dating from at least Elizabethan times, was raised to parish church status. The original chapel building, about which nothing is known, had been replaced in 1727 and this had been rebuilt in 1827. This Gothic-style building burnt down in 1928 and was replaced by the current church, designed by Percival Hartland Thomas, which has a distinctive electric carillon installed in 1959 with the aid of a benefaction from parishioner Mabel Creber.[5]

There are three churches of other denominations in Shirehampton: Methodist, Baptist, and Roman Catholic, in order of establishment of their congregations.

During World War I, Shirehampton was the location of a remount depot for horses.[6] This was the largest such depot in the country, with a capacity of up to 5,000 horses. These horses were mostly supplied from the US and Shirehampton was conveniently close to the new Royal Edward Dock at Avonmouth where they were landed. After some weeks of training, horses would then pass to the depot at Swaythling, from where they passed to France. 347,045 horses and mules passed through Shirehampton in the course of the war.

Shirehampton expanded considerably in the later nineteenth century, and was absorbed, with Avonmouth, by the city of Bristol in 1904. After World War I, the city built a great deal of decent social ("council") housing here, and this has largely determined the present character of the place.

Along the High Street there remains a fair sprinkling of the larger houses which typified the place before 1900, often (like Twyford House and The Wylands) converted to public or commercial use; some have been demolished and replaced by small infill estates (like Sunny Hill); some have been retained and surrounded by other houses (such as Penlea and the former vicarage partly retaining some of the supposed priory's construction); and some have gone altogether like the ancient manor house, of sixteenth-century appearance, which has been lost to road widening and a row of 1960s shops.

As Shirehampton and Avonmouth grew, the "squires" of Kings Weston House, notably Philip Napier Miles (1865–1935), gave many benefactions to the district, including land for churches, war memorials and social amenities. Among these important gifts was the Public Hall of 1904,[7] whose main claim to fame is perhaps that it was the venue of the first performance of Vaughan Williams' violin rhapsody The Lark Ascending, played, along with piano accompaniment, by violinist, and friend of Vaughan Williams from his visits to Kings Weston house, Marie Hall, in 1920. The beautiful Little Park or Shirehampton Park was given to the National Trust after World War I, and is used as a golf course.

Shirehampton is well provided with churches, schools, sporting facilities (some now in a state of neglect), shops and pubs. It has a number of fine public open spaces and interesting antiquities nearby. These include Kingsweston Roman Villa (whose ruins are visible by the roadside in the modern suburb of Lawrence Weston), Blaise Castle Estate, and Blaise Castle House Museum, in addition to Shirehampton Park. 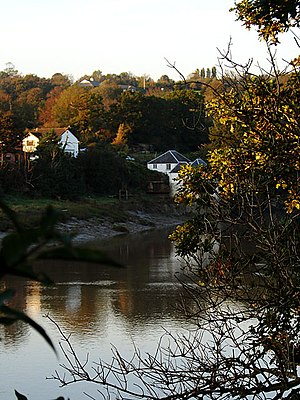 On the banks of the River Avon stands the Old Powder House. It was built in 1775-6 to store gunpowder, which was not allowed into Bristol docks. It is a Grade-II listed building.[8] The village war memorial stands by Shirehampton Road north of the golf course, not far from the site of the now dry Rush Pool, a pool formerly used by drovers bringing cattle from Wales across the Severn to market in Bristol.

The Lamplighters Marsh Site of Nature Conservation Interest is also within the boundaries of Shirehampton.