Elephant Island is an ice-covered, mountainous island off the coast of Graham Land, Antarctica in the outer reaches of the South Shetland Islands. Its name was given by early explorers sighting elephant seals on its shores.

The island lies 779 miles west-southwest of South Georgia, 581 miles south of the Falkland Islands, and 550 miles southeast of Cape Horn. It is within the British Antarctic Territory.

Elephant Island is most famous as the place which Shackleton and his men reached after the loss of the Endurance and where the remaining men waited while Shackleton and five others sailed into the stormy ocean to seek rescue.

The island is approximately an east to west orientation, with a maximum elevation of 2,799 feet above sea level at Pardo Ridge. Significant named features of the island are Cape Yelcho, Cape Valentine and Cape Lookout at its northeastern and southernmost extremes, and Point Wild, a spit of land on its northern coast. The Endurance Glacier is the main discharge glacier on the island. 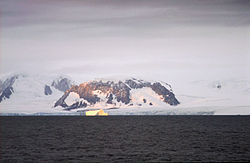 Elephant Island seen from the sea

The island supports no significant flora or native fauna although migratory Gentoo penguins and seals may be found on its shores, and Chinstrap penguins nest there in season. A lack of safe anchorage has prevented any extended settlement being formed, though the island is otherwise well placed to support scientific, fishing and whaling activities in the area.

Elephant Island's name can be attributed to both its elephant head-like appearance and the sighting of elephant seals by Captain George Powell in 1821, one of the earliest sightings of the island. Its weather is normally foggy with much snow. Additionally, winds can reach speeds up to 100 mph on the frigid island. 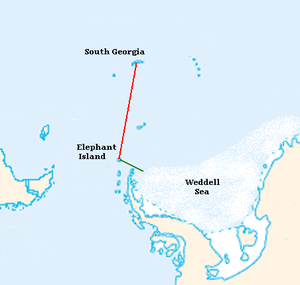 The route of the James Caird to South Georgia 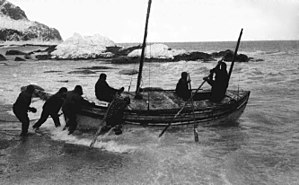 Launching the James Caird from the shore of Elephant Island, April 24, 1916

The island is most famous as the desolate refuge of Ernest Shackleton and his crew in 1916. Following the loss of their ship Endurance in Weddell Sea ice, the 28 exhausted men reached Elephant Island after a harrowing ordeal on drifting ice floes. They established a camp at a place they called Point Wild where they were able to regain some strength.

Realizing that there was no chance of rescue by any passing ships, Shackleton decided to travel to South Georgia where he knew there were whaling stations. In one of the most incredible feats in the history of sailing and navigation, Shackleton sailed off with five other men on an 800 miles voyage in the open lifeboat James Caird on Easter Monday, 24 April 1916, arriving at South Georgia almost two weeks later.

Shackleton's second in command, John Robert Francis "Frank" Wild remained in charge of the 21 other men on Elephant Island for more than four months while Shackleton led attempts to return with a rescue ship.[1] In his memoir Wild recalled "We gave them three hearty cheers and watched the boat getting smaller and smaller in the distance. Then seeing some of the party in tears, I immediately set them all to work."

Indeed, there was much work for the stranded party. Because the island had no natural source of shelter, they constructed a shack and wind blocks from their remaining two lifeboats and pieces of canvas tents. Blubber lamps were used for lighting. Expedition physicist Reginald James composed the following verses out of gratitude for Wild's leadership:[2]

They hunted for penguins and seals, neither of which were plentiful during the autumn and winter months. The crew, many of whom were already ill and frost-bitten, were now also in danger of starvation. After four and a half months of waiting, one of the stranded men spotted a ship on 30 August 1916. The ship, led by Shackleton, was the borrowed tug boat Yelcho, from Punta Arenas in Chile, commanded by Luis Pardo, which broke through the ice surrounding the island to finally rescue all of the men who set out on the original expedition.

According to Frank Worsley, Shackleton's captain, the men pronounced the island with a silent 't' and an 'h' prefixed, which makes it into Hell-of-an-Island.[3]