Deception Island is an island, in the South Shetland Islands, within the British Antarctic Territory and lying off Graham Land. Deception has one of the safest harbours in Antarctica.

The island is the caldera of an active volcano, which caused serious damage to the local scientific stations in 1967 and 1969. The island previously held a whaling station; it is now a tourist destination and scientific outpost, with research bases run by Argentina and Spain.

The British base on Deception Island was mothballed in 1969 when threatened by the volcano, and subsequently severely damaged by it, and destroyed the Chilean stations on the island. 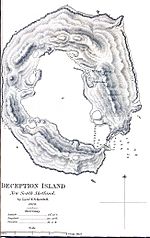 The first authenticated sighting of Deception Island was by the British sealers William Smith and Edward Bransfield from the brig Williams in January 1820.[1] It was named by the United States sealer Nathaniel Palmer later that year.[1]

Since the early 19th century, Deception Island was a favourite refuge from the storms and icebergs of Antarctica. It was first used by sealers. The volcano has destroyed most attempts to maintain permanent facilities. In 2000, there were two summer-only scientific stations, the Spanish Base Antártica Gabriel de Castilla[2] and the Argentinian Decepción Station.[3]

In 1829, the British Naval Expedition to the South Atlantic under the command of Captain Henry Foster in HMS Chanticleer stopped at Deception Island. The expedition conducted a topographic survey and scientific experiments, particularly pendulum and magnetic observations.[4]

In 1906, a Norwegian-Chilean whaling company headed by Adolfus Andresen started using Whalers Bay as a base for a factory ship, the Gobernador Bories. Other whaling operations followed and by 1914 13 factory ships were based there. The on-shore station, built in 1912 by the company Hvalfangerselskabet Hektor A/S, did not process whale blubber, which was done on the ships, but boiled down the carcasses in large iron boilers to extract additional whale oil, which was stored in iron tanks. Whale oil prices dropped during the Great Depression, making the station uneconomic and it was abandoned in 1931.[5] Advances in factory ships made shore stations for carcass processing unnecessary, and it was never reoccupied. 35 men were buried in the station's cemetery along with a memorial to 10 more presumed drowned; but the cemetery was buried by a volcanic eruption in 1969.[5]

In the 1940s and 1950s, Argentina contested control of Deception Island with the United Kingdom, with some removals of the sovereign flag and temporary occupation of the island.

A permanent British base was established on Deception Island on 3 February 1944, as part of Operation Tabarin. This was occupied until 5 December 1967, when an eruption forced a temporary withdrawal. It was used again between 4 December 1968 and 23 February 1969, when further volcanic activity caused it to be abandoned.[6] 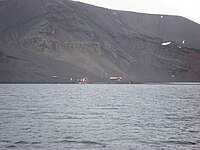 In the season 1963-1964, the United States Coast Guard icebreaker Eastwind visited Deception Island, when the British and Chilean scientific stations were active. The Chileans had an airstrip, with a DeHavilland Beaver supplying their base from Punta Arenas. There were active fumaroles spewing noxious gases and some fumaroles had churning volcanic ash in the depressions. The Eastwind ran aground on 21 January 1964, which is likely the only time an American military ship ever ran aground inside an active volcano. The ship refloated with the rising tide.[7]

In 1969, a violent volcanic eruption demolished the Chilean stations Pedro Aguirre Cerda and Refugio Cabo Gutiérrez Vargas. Remains at Whalers Bay include rusting boilers and tanks, an aircraft hangar and the British scientific station house (Biscoe House), with the middle torn out by the 1969 mudflows. A bright orange derelict airplane fuselage was recovered in 2004. There are plans to restore the airplane and return to the island.[3]

The Russian cruise ship MV Lyubov Orlova ran aground at Deception Island on 27 November 2006.[8] She was towed off by Spanish Navy icebreaker, Las Palmas and later became a ghost ship in the North Atlantic. 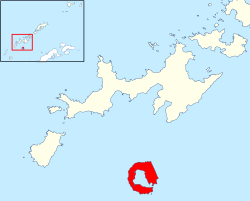 The island is approximately circular with a diameter of about 7½ miles. A peak on the east side of the island, Mount Pond, has an elevation of 1,778 feet, and over half the island is covered by glaciers. The centre of the island is a caldera formed in a huge eruption (reckoned on the Volcanic Explosivity Index as 'VEI-6') which has been flooded by the sea to form a large bay, now called Port Foster, about 5½ miles long and almost 4 miles wide. The bay has a narrow entrance, just 750 feet wide, called Neptune's Bellows. Adding to the hazard is Ravn Rock, which lies 8.2 feet below the water in the middle of the channel. Just inside Neptune's Bellows lies the cove Whalers Bay, which is bordered by a large black sand beach.

Several maars line the inside rim of the caldera, with some containing crater lakes (including one named Crater Lake). Others form bays within the harbour, such as Whalers Bay, a thousand yards wide. Other features of the island include Mount Achala, Primero de Mayo Bay, Sewing-Machine Needles, Telefon Bay and Telefon Ridge. 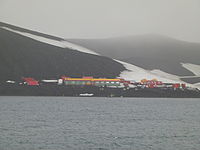 The Spanish base Gabriel de Castilla

Deception Island has become a popular tourist stop in Antarctica because of its several colonies of Chinstrap Penguins, as well as the novel possibility of making a warm bath by digging into the sands of the beach. Mount Flora is the first site in Antarctica where fossilized plants were discovered.[9]

After the Norwegian Coastal Cruise Liner MS Nordkapp ran aground off the coast of Deception Island on 30 January 2007, fuel from the ship washed into a bay. Ecological damage has not yet been determined. On 4 February 2007 the Spanish Gabriel de Castilla research station on Deception Island reported that water and sand tests were clean and that they had not found signs of the oil.

Deception Island exhibits some wildly varying microclimates. Some water temperatures reach 70°C. Near volcanic areas, the air can be as hot as 40°C.

Some 11 terrestrial sites have been collectively designated an Antarctic Specially Protected Area (ASPA 140), primarily for their botanic and ecological values, because the island has the greatest number of rare plant species of any place in the Antarctic. This is largely due to frequent volcanic activity creating new substrates for plant colonisation:[10]

Baily Head, a prominent headland forming the easternmost extremity of the island, has been identified as an Important Bird Area (IBA) by BirdLife International because it supports a very large breeding colony of Chinstrap Penguins (100,000 pairs). The 193 acres IBA comprises the ice-free headland and about 800 m of beach on either side of it. Other birds known to nest at the site include Brown Skuas, Cape Petrels and Snowy Sheathbills.[12]