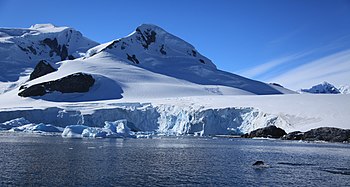 Graham Land is a part of the British Antarctic Territory comprising the northern portion of the Antarctic Peninsula; the parts north of a line joining Cape Jeremy and Cape Agassiz. 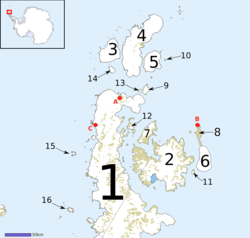 Falkland Islands stamp of 1944 overprinted for use in Graham Land

Formerly the name "Graham Land" was that of the whole peninsula, but while Britain gave it that name, the Americans applied the name "Palmer Land" to the peninsula after an American sea captain. To avoid confusion and argument, in 1964 agreement was reached between the British Antarctic Place-names Committee and the American Advisory Committee on Antarctic Names, that the name "Antarctic Peninsula" be approved for the major peninsula of Antarctica, and the names "Graham Land" and "Palmer Land" for its northern and southern portions, respectively. Both Graham Land and Palmer Land are within the British Antarctic Territory

Graham Land is named after Sir James R G Graham, First Lord of the Admiralty at the time of John Biscoe's exploration of the west side of Graham Land in 1832.

Under the leadership of John Riddoch Rymill, the expedition spent two years in the Antarctic. The expedition determined that Graham Land was a peninsula.[2] The expedition used a combination of traditional and modern practices in Antarctic exploration, using both dog teams and motor sledges as well as a single-engine de Havilland Fox Moth aircraft for exploration. The voyage to the Antarctic was in an elderly three-masted sailing ship christened the Penola, which had an unreliable auxiliary engine.[2] Additional supplies were brought on the ship Discovery II.

The expedition was one of the last privately-sponsored Antarctic missions, of which only part of the cost covered by the British government. Although the expedition had a very small budget, it was successful in its scientific objectives. Air survey photography and mapping was carried out for 1000 miles of the Graham Land coast.

All sixteen members of the landing party received the Polar Medal. One of the participants of the BGLE was Dr Brian Birley Roberts, who later contributed to the drafting of the Antarctic Treaty.[3]