Half Moon Island is a minor island of the South Shetland Islands, within the British Antarctic Territory, lying under a mile north of the Burgas Peninsula of Livingston Island.

The surface area of Half Moon is 423 acres.[1] The Argentine Cámara Base, which operates occasionally in the summer, is on the island and is accessible only by sea and by helicopter.

Plants found on the island include several lichen and moss species as well as Antarctic Hairgrass.[1]

The island has been identified as an 'Important Bird Area' by BirdLife International because it supports a breeding colony of about 100 pairs of South Polar Skuas. Other birds nesting on the island include Chinstrap Penguins (2000 pairs), Antarctic Terns (125 pairs), Kelp Gulls (40 pairs), Wilson's and Black-bellied Storm Petrels, Cape Petrels, Brown Skuas, Snowy Sheathbills and Imperial Shags.[1]

Weddell and Antarctic Fur Seals regularly haul out on the beaches. Southern Elephant Seals have been recorded.[1] Whales are often seen along the shores.

The island is used as a stop during Antarctic cruises, with the peak of visitation during November–March. There is a 2,000-yard walking track on the southern part of the Island which allows tourists to get a close view of the wildlife (mainly Chinstrap Penguins and skuas), and of the surrounding mountainous scenery of nearby Livingston and Greenwich Islands. The path begins on the south side of Menguante Cove, runs westwards along the beach to Cámara Base, then turns north along the head of Menguante Cove, and eventually ascends northeastwards to the top of Xenia Hill.[2] 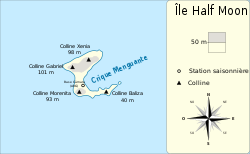 In September 2010, Google added Street View imagery of Half Moon Island to its Google Earth and Google Maps services.[3] The expansion of Google Street View onto the island means all seven continents had imagery through the service.[4]

As the island has no roads, the images appear to have been taken with a camera on a tripod. The shadow of the photographer can clearly be seen if one were to move the view so as to look at the ground. Also, the iconic ‘Pegman’ from Google was replaced with a Penguin, appropriate to the island’s ‘population’.