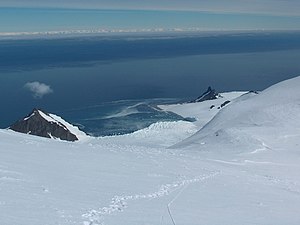 The Brandfield Strait from Livingston Island

The Bransfield Strait is a broad sea passage in the British Antarctic Territory which separates the South Shetland Islands from the Trinity Peninsula of Graham Land and the Joinville Island Group.

The straight was discovered in January 1820 by Edward Bransfield, Master, RN (1785-1852), commanding HM hired brig Williams for her Antarctic voyage of 1819-20 to survey the South Shetland Islands. On this voyage Bransfield and his crew became the first men to see the continent of Antarctica, discovering the Trinity Peninsula.

Bransfield thought the waters to be a gulf. It was subsequently charted as a strait by early sealers.

Icebergs in the Bransfield Strait

The next year, Nathaniel B. Palmer, the American sealing captain and explorer commanding the brig Hero, noted in his log a passage he called 'Christmas Sound', which is believed to refer to the Bransfield Strait; however the name 'Bransfield Strait' or Bransfields Strait' and variant spellings appeared on subsequent sea charts.