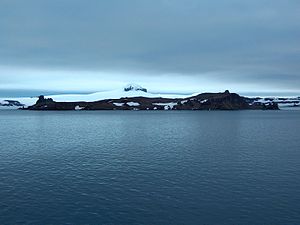 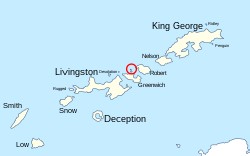 Location of the Aitcho Islands in the South Shetland Islands

The Aitcho Islands are a group of minor islands amongst the South Shetland Islands within the British Antarctic Territory. These islands lie on the west side of the north entrance to English Strait, which separates Greenwich Island from Robert Island, situated between Dee Island to the south and Table Island to the north.

The name 'Aitcho' is from the abbreviation ‘H.O.’, for the Hydrographic Office.

The group is separated from Dee Island and Sierra Island to the southwest by Villalón Passage.

The area was visited by early 19th century sealers operating from nearby Clothier Harbour. During the austral summer the islands are often visited by Antarctic cruise ships with tourists who land to watch wildlife.

The islands were mapped in 1935 during the oceanographic investigations carried out by the Discovery Committee, and named after the Hydrographic Office of the British Admiralty.[1] Some of the island names were given by Chilean Antarctic expeditions between 1949 and 1951. 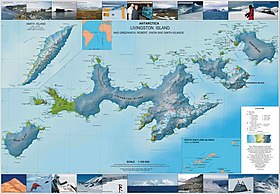 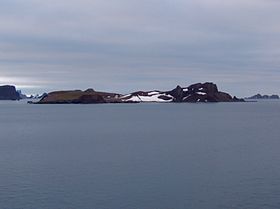 The islands and some notable rocks of the Aitcho group are:

Among the bird species found on the islands are chinstrap and gentoo penguins, southern giant petrels, and skuas. Southern elephant seals are among the larger beasts here. There are also a wide variety of lichens and mosses reported.[2]