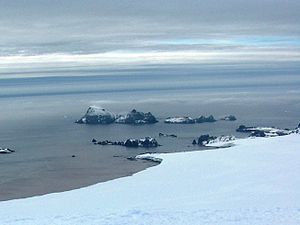 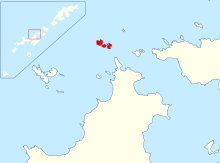 Location of the Zed Islands

The Zed Islands are a small group of islands, the westernmost rising to 950 feet above the sea, lying off Williams Point, the north-eastern extremity of Livingston Island in the South Shetland Islands in the British Antarctic Territory.

The gorup comprises four islets and adjacent rocks. They are separated from Livingston Island to the south by a passage just under a mile wide.

The islands were roughly charted as one island by Bransfield in 17 January 1820, and called 'Smiths' Island' in the belief that the feature had been sighted by W. Smith in 1819. A later charting records the 'Dunbars', referring collectively to these islands and to Meade Islands, after Capt. T. Dunbar (from whom the Dunbar Islands are named).

The islands were recharted by Discovery Investigations, 1934-35, and named 'Zed Islands' from their configuration. The islands were photographed from the air by the Falkland Islands and Dependencies Aerial Survey Expedition in 1956-57.