Ivinghoe is a village in Buckinghamshire close to the borders with Hertfordshire and Bedfordshire. It is four miles north of Tring and six miles south of Leighton Buzzard, close to the village of Pitstone.

The village name is Old English in origin; Ifan hoh means Ifa's hill-spur. In the Domesday Book of 1086 it was recorded as Evinghehou.

Ivinghoe is also an important point on the Icknield Way, joining the Upper Icknield and Lower Icknield together. The Icknield way is claimed to be the oldest road in Britain, and dates back centuries. 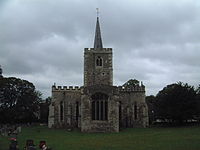 The large church dates from 1220 but was set on fire in 1234 in an act of spite against the local Bishop. The church was rebuilt in 1241.

For a village Ivinghoe has an unusual feature: a town hall, rather than a village hall. The village has some fine examples of Tudor architecture, particularly around the village green.

Ivinghoe Beacon, near the village, is an imposing hill and the site of ancient beacon, or signal point, which was used in times of crisis to send messages across the country and is now popular with walkers who just want to get exercise and see the view. It used to be used as a site for flying model aeroplanes but has been forbidden due to accidents. The hill is the site of an early Iron Age hillfort which during excavations in the 1960s was identified from bronzework finds to date back to the Bronze-Iron transition period between 800-700 BC. Like many other similar hillforts in the Chilterns it is thought to have been occupied for only a short period, possibly less than one generation.

Nearby is Pitstone Windmill, owned by the National Trust.

Scenes for feature films, such as Quatermass 2, Batman Begins and The Dirty Dozen have been shot at Ivinghoe Beacon. Ivinghoe village, meanwhile, once served as a set for the children's TV series ChuckleVision.

Ivinghoe Aston is a hamlet within the parish of Ivinghoe. Its name refers to a farm to the east of the main village. The hamlet has four farms and some houses. There is also a public house, The Village Swan, which was bought by some of the residents in 1997. Ivinghoe Aston has close connections with the Vale of Aylesbury Hunt, and the South Hertfordshire Beagle pack. Both packs meet there and hunt nearby.

A small stream called Whistle Brook flows down through the hamlet, from the Chilterns above, to join the River Ouzel at nearby Slapton.

Another hamlet in Ivinghoe is Greatgap.