Drayton Parslow is a village and parish in the Cottesloe Hundred of Buckinghamshire, about three and a half miles south of Bletchley. The 2011 Census recorded the civil parish's population as 614.[1]

In the 11th century the toponym was Draintone or Draitone.[2] This is derived from Old English and means "farm where sledges are used". It is a common English toponym for places that were on a hillside, where a sledge rather than a cart was needed for heavy loads. By the 13th century it had become Draitone Passele, referring to the Passelewe family who tenanted the manor of Drayton from the latter part of the 11th century.[2] It evolved through Draygtone Passelewe in the 14th century and Draighton Perselow in the 17th century before reaching its current form.[2]

In the reign of Edward the Confessor in the 11th century, Lewin de Nuneham held a manor of two hides and one virgate at Drayton.[2] After the Norman conquest, Lewin was displaced as feudal overlord by the Norman Geoffrey de Montbray, Bishop of Coutances.[2] De Montbray tried unsuccessfully to displace the Passelewes as his tenants, and the family retained Drayton until 1379 when it passed by marriage to the Purcell family.[2] In 1461 it was conveyed to a descendant of the Passelewes, William Laycon, in whose family it then remained until at least 1570.[2]

In Edward the Confessor's reign two brothers held a second, smaller manor of three virgates at Drayton.[2] The Domesday Book records that by 1086 William I's half-brother Odo, Bishop of Bayeux held the fief of this manor.[2] However, Odo was tried for fraud in 1076 and disgraced again in 1082 for acting without Royal authority, and his extensive estates were eventually escheated to the Crown. Odo's Drayton manor was annexed to the Honour of Ampthill in Bedfordshire.[2] In 1562 it was linked with the manor of East Greenwich, and the last record of overlordship of this manor is dated 1607.[2] 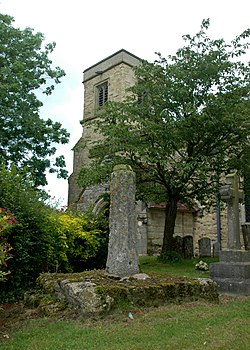 The Church of England parish church of the Holy Trinity contains fragments of 12th-century masonry.[3] The first known documentary record of the parish church is from 1232.[2] The chancel was rebuilt in the 14th century[3] in the Decorated Gothic style. In the 15th century the nave was rebuilt and the west tower was built or rebuilt in the Perpendicular Gothic style.[3] Of the same period are the Perpendicular Gothic hexagonal baptismal font,[4] the three-light east window of the chancel, a 15th-century alabaster relief above the altar depicting the Crucifixion of Jesus and fragments of 15th-century stained glass in the windows.[3] In the 16th century the south porch was added.[3] In 1863 the church was restored and the chancel was extended about 6 feet (2 m) eastwards, re-using the Perpendicular east window in the new position.[2] Holy Trinity is now a Grade-II* listed building]].[3]

By 1925 Holy Trinity had a ring of three bells.[2] Bartholomew Atton of Buckingham[5] cast the tenor bell in 1591.[6] John Taylor & Co of Loughborough, who at the time also had a foundry at Oxford, cast the treble and second bell in 1842.[6] In 1935 these became the fourth and fifth bells as John Taylor & Co cast a new treble, second and third bells, increasing the ring to six.[6]

Holy Trinity has also a Sanctus bell that was cast in 1669 by Anthony Chandler, who worked at his family's bell-foundry in the village (see below).[6] 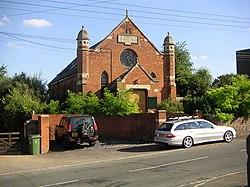 Drayton Baptist Chapel was built in 1830.[2] Worship at the chapel is now on alternate Sunday mornings.[10]

Drayton's first Primitive Methodist chapel was built in 1847.[2] In 1912 it was replaced with a new Gothic Revival red brick chapel, and in 1932 it became part of the Methodist Union.[11] Drayton's Methodist congregation declined in the 1960s and 70s, and in 1984 the chapel was sold and converted into a private house.

163 bells cast by founders from Drayton Parslow are known to survive.[5] Examples in Buckinghamshire include bells at St James, Aston Abbotts, St Nicholas, Ickford and St Giles, Pitchcott and the Sanctus bell at St John the Evangelist, Whitchurch. There are also examples in Oxfordshire including at The Assumption of the Blessed Virgin Mary, Beckley, St Michael's, Fringford, St Mary the Virgin, Kidlington and SS Peter and Paul, Steeple Aston and the Sanctus bells at St Mary, Chesterton and St Nicholas', Emmington. An example in Northamptonshire is at St James the Less, Sulgrave.

Drayton Parslow Village School is a mixed, community, infant school, which educates children between the ages of four and seven and has about 45 pupils. Since 2007 the school has been in a partnership sharing a single headteacher with the schools in Mursley and Swanbourne.[12] Many parish children older than seven go to Swanbourne C of E School,[13] the Junior school of the Three Schools, while others travel to Stewkley or Winslow.

Drayton Parslow has a public house, The Three Horseshoes.[14]