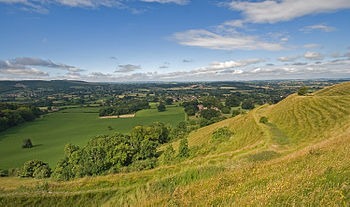 View from Hambledon Hill over the Blackmore Vale 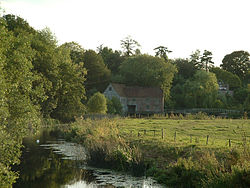 The Blackmore Vale (less commonly spelt Blackmoor) is a broad valley, in northern Dorset, and to a lesser extent spreading into southern Somerset and southwestern Wiltshire.

The vale is part of the Stour valley. It may be delimited by the Dorset Downs, a chalk ridge to the south; Cranborne Chase, chalk hills to the east; and the watershed between the Stour and Yeo valleys to the northwest (which generally follows close to the borders between Dorset and Somerset). The Stour flows into the vale north of Gillingham, and out at Blandford Forum in the southeast, a town sandwiched between the Dorset Downs and Cranborne Chase.

The vale is part of the 'Dorset Area of Outstanding Natural Beauty'.

When viewed from the high chalk escarpments edging the valley, the Blackmore Vale appears quite uniform, as a large expanse of green, lush, low-lying land. In geological terms though it is diverse: it comprises alternating belts of different clay and limestone soils (and greensand at the foot of the chalk), which give rise to subtle variations in topography and appearance, and which have an impact on land use.

The majority of the villages of the vale are built on the drier strips of limestone, whereas the more poorly draining clays (which comprise the greater bulk of the area) are more sparsely populated,[1] supporting mostly small farms, dotted across the vale. Due to the clay soils, land use is predominantly dairy farming. Until it was closed in 1998, Sturminster Newton livestock market was the busiest weekly livestock market in Britain.

The vale, in particular the village of Marnhull ("Marlott"), is the opening backdrop for Thomas Hardy's Tess of the D'Urbervilles. Hardy also lived and wrote in Sturminster Newton for a time.

Douglas Adams and Robert Boyle each lived in Stalbridge for part of their lives.

Villages in the Blackmore Vale include:

Shaftesbury, Sherborne and Wincanton are on the edges of the vale, but not accounted as lying within the vale itself. From Shaftesbury town centre, at the summit of a hill, the sudden scarp gives fine views out over the Blackmore Vale.