Okeford Fitzpaine is a village in Dorset, in the Blackmore Vale three miles south of the town of Sturminster Newton. The village stands on a thin strip of greensand under the scarp face of the Dorset Downs.[1]

The 2011 census recorded that the civil parish (including the hamlet of Belchalwell to the west and most of Fiddleford to the north) had 404 dwellings, 380 households and a population of 913.

Prehistoric remains within the parish include three cross dykes and five round barrows on the chalk hills south of the village, and an iron age hill fort on Banbury Hill, towards Sturminster Newton. Banbury hill fort covers about three acres and is of univallate (single rampart) construction, though its defences have been reduced by cultivation.[2]

In 1086 in the Domesday Book, Okeford Fitzpaine was recorded as Adford;[3] it had 40 households, 16 ploughlands, 21 acres of meadow and 1 mill. The tenant-in-chief was Glastonbury Abbey.[4] Since then it has been known as "Aukford Alured" and "Ockford Phippin", the latter echoing the modern colloquial "Fippenny Ockford" and its shorthand, "Ockford".[5]

The present civil parish of Okeford Fitzpaine includes several areas from other ancient parishes: Banbury Common (a detached part of Child Okeford); and Belchalwell (plus three of its four detached parts). Until 1966 almost the entire village was owned by the Pitt-Rivers family, so it has no "big house", and comprised mostly tenant farmers. The village was sold off at auction by his mistress Stella Lonsdale following the death in 1966 of George Pitt-Rivers, who specified that the Estate not be sold as such, but that each property be sold individually, so that existing tenants might buy their leased farms.[6][7]

The Parish Church of St Andrew is built from greensand and Marnhull limestone and has a 14th-century tower arch and west window, a mid-15th-century west tower, and a 19th-century chancel. The aisles and nave are also 19th century, though they incorporate some 15th-century elements. The pulpit is 15th century, albeit much restored.[2]

The Church of St Aldhelm, the parish church of Belchalwell, lies to the south-west. The nave has late-12th-century origins, though only part of the south wall remains from this date. The south doorway is well preserved, dating to about 1190, and is ornamented with chevron and dog-tooth patterning. The north aisle, chancel, south tower and south porch are 15th-century additions, though at the end of the 19th century the east wall of the chancel and all the north aisle were largely rebuilt, as were the west walls of the nave and south porch.[2]

The Old Rectory has a main block that probably was built in the mid-18th century by the Rev Duke Butler; it has a symmetrical five-bay east front comprising rendered walls above ashlar and rubble plinths. An earlier brick-walled kitchen wing to the north-west has a large fireplace with a chamfered bressummer.[2] 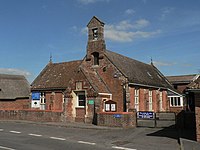 Within the parish are listed buildings and structures. Among these are the two churches, a barn off High Street; a green-painted K6 telephone kiosk by the post office; 164 feet of raised pavement in Shillingstone Lane; a table tomb in St Andrew's churchyard; and another in St Aldhelm's churchyard.[8][9]

The village has a tiny museum exhibiting the village's own early 19th-century fire engine and the Second World War air-raid siren issued to the village post office.

There is what remains of a Cross, of ashlar and comprise a chamfered plinth and two square steps on which rests an octagonal cross-base, chamfered on top and with broach stops occupying the corners of the square. The tenon of the cross-shaft still lodges in a square mortice at the centre of the octagon, but the rest has gone.[2]

Okeford Fitzpaine has a village hall, which can cater for conferences of up to 140 people and parties of up to 200; it has full facilities for people with disabilities.[10] The village also has a public house called the Royal Oak,[11] and a village shop, "The Old Bell Stores".