The village's name derives from the Old English cild, meaning 'child', with ac ('oak') and ford. The early appearance of the name as Acford suggests that 'Child' is a prefix, perhaps indicating the son of noble family.

On Hambledon Hill to the east of the village are a Neolithic ceremonial burial site and an Iron Age hill fort. The latter has multiple ramparts enclosing 31 acres and is rich in occupation remains. It occupies the entire northern spur of the hill above 460 feet and has been described as "one of the most impressive earthworks in southern England".[1]

In the Domesday Book of 1086 Child Okeford was recorded as Acford[2] and appears in two entries. It had 39 households and a total taxable value of 10 geld units.[3]

By 1227 the village was known as Childacford.

In 1645 Hambledon Hill was the site of a battle in the Civil War; a group of locals, who were antagonistic to the war and called themselves "the Clubmen", attacked both Royalist and Parliamentarian forces and petitioned them to end the war. Under the leadership of the rector of nearby Compton Abbas, 2,000 of them assembled on the hill and defied Oliver Cromwell's requests to lay down their arms. Cromwell sent in troops and defeated them, then locked up 300 prisoners in the church at Iwerne Courtney and extracted promises of good behaviour. Cromwell wrote of them as being "poor silly creatures" who "promise to be very dutiful for time to come".[4] A century later, General James Wolfe used the hill's steeper sides to prepare his soldiers; they later surprised the French at Quebec by scaling the Plains of Abraham under cover of darkness.

A First World War war memorial in the form of a stone cross stands at the road junction known in the village as The Cross. 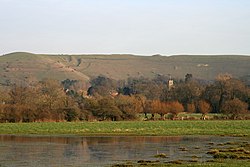 Child Okeford parish covers 1,570 acres. The underlying geology is Kimmeridge clay, upper and lower greensand, gault, some chalk in the east and river gravels by the River Stour.

Child Okeford has a village hall,[5] a community centre,[6] a playing field (including a football pitch and cricket pitch),[7] a doctor's surgery,, a post office and a general store

There is a Church of England primary school and a nursery or educational support centre for children age 0–11 years.

Gold Hill Farm, a small business community, is home to an organic food shop, a café, a rushwork workshop and an art gallery.

In 1561 William Kethe was appointed vicar of the parish. He remained in the village until his death in 1594. Kethe wrote the hymns O worship the King, all glorious above and All people that on earth do dwell, the latter adapted from Psalm 100 and set to the tune of ‘The Old Hundredth’’.[8]

The composer Sir John Tavener lived in the village until his death in 2013.