Wincanton is a small town in Somerset, a town on the main A303 road between London and the West Country. It has some light industry. The town has a population of 4,643.

Wincanton is on the north east edge of Blackmore Vale, 15 miles north east of Yeovil, and 12 miles northwest of Shaftesbury on the extreme southeast of Somerset close to the borders of Dorset and Wiltshire. It is part of the Norton Ferris Hundred. 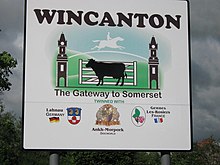 Wincanton is twinned with Ankh-Morpork, a city state near the Circle Sea on Discworld, the fictional world of Terry Pratchett's Discworld books.[1] The twinning, announced in 2002, makes Wincanton unique in having a fictional twin-town. On 5 April 2009, a number of roads were given names taken from Ankh-Morpork, such as Peach Pie Street and Treacle Mine Road,[2] after a short-list was voted upon by fans. There is a shop in High Street called The Cunning Artificer, which sells collectors items relating to Discworld.

The town has more conventional twin-towns too in Gennes - Les Rosiers-sur-Loire in France and Lahnau in Germany.

Churches in Wincanton include:

The Church of St Peter and St Paul was almost totally rebuilt 1887-91 by J D Sedding but parts of the tower may be remnants form an earlier church, dating from 1313, on the same site.[3] In 1793 the tower was raised by 12 feet making it 50 feet high, five bells were cast and a sixth added. The additional carving and north porch were added in subsequent years.[4]

The churchyard include a self designed monument to the local architect Nathaniel Ireson who died in 1796.[5]

Windmill Hill was the site of a Bronze Age Beaker culture burial, and contemporary artefacts have been found on the Selwood Ridge.[6]

Wincanton has been a battlefield, once fought between the Britons and Saxons, later with the Danes.[7] Edmund Ironside defeated the Danes hereabouts too.

Wincanton itself does not appear in the record until the Domesday Book of 1086, in which the name appears as Wincaleton thought to mean Pleasant town on the Cale', or from Wyndcaleton.

Cockroad Wood Castle, which is now in the parish of Charlton Musgrove, was a motte and bailey castle, probably built after the Norman conquest of England in 1066.[8] The castle sits close to the contemporary Norman castles of Ballands and Castle Orchard, and may have been built a system of fortifications to control the surrounding area.

By the time of the Domesday Book, the surrounding land was held by Walter of Douai, although no documentary evidence of the castle remains.[9]

Wincanton was probably the site of a market in the mediæval period but did not gain a market and fair charter until 1556.[10]

According to according to Burnet's History of his own Times, the first blood shed in the Glorious Revolution of 1688 was at Wincanton, though Cirencester claims that too. Considered a bloodless revolution, at least in England, nevertheless local skirmishes did take place during the advance of William of Orange from Devon to London.

Wincanton has given its name to Europe's second largest logistics company, Wincanton plc, where it still has a base, although its head office function moved to Chippenham, Wiltshire in 2005.[13]

Wincanton is also home to Adams Foods Ltd., producer of the Pilgrim's Choice brand of Cheddar cheese, one of the best selling brands in the United Kingdom.

There has been an influx of foreigners in the last two years, especially Portuguese and Poles.

The Dogs (also called The Old House) was built around 1650, and was reshaped internally by Nathaniel Ireson in 1740-50. It is a Grade I listed building.[14]

Wincanton Museum is a small local museum in the High Street, housed in a late 18th or early 19th century cottage, a Grade II listed building,[15] which is owned by the Quakers. The Museum has a collection of artefacts, documents, posters and photographs related to the social history of Wincanton and the surrounding district. There is also a replica of a Victorian kitchen and a collection of 19th and 20th century farm implements.[16] A separate room is devoted to First World War and Second World War, and to the American soldiers stationed in the town in advance of the Normandy landings.[17] 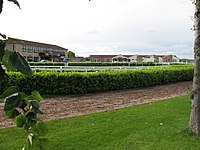 The town is the home of Wincanton Racecourse even though it is technically in the neighbouring parish of Charlton Musgrove.

The Sports Ground in Moor Lane provides facilities for tennis, football and bowls.

The cricket club has 2 Saturday teams, 1 Sunday team and play in the recreation ground.[19]

The rugby club plays at King Arthur's Community School in the town. In 2010 they won their Dorset & Wilts division of the English Rugby Union South West Division.[20]

There is also a Youth Football Club[21] which plays at Moor Lane.