Blandford Forum, commonly Blandford, is a market town in Dorset on the River Stour. The town is noted for its fine Georgian architecture, the town having been rebuilt in the style after a disastrous fire in the eighteenth century.[1]

Blandford Camp, a military base, is sited on the hills a mile to the east of the town.

The town between Cranborne Chase and the Dorset Downs, at the south-eastern corner of the Blackmore Vale, 15 miles north-west of Poole.

Blandford was a natural fording point n the Stour. In Anglo-Saxon times it was recorded as Blaen-y-ford and as Blaneford in the Domesday Book, meaning ford of the river of blay, or bleak (Alburnus alburnus). By the 13th century it had become an important market town with a livestock market serving the nearby Blackmore Vale with its many dairy farms. The Latin word Forum, meaning market, was recorded in 1540.[2]

Blandford was an important break on the journey between the port of Weymouth and London. There is still a weekly outdoor market and a bi-weekly indoor market held in the Corn Exchange.

In 1731 much of the town was destroyed in a fire. John and William Bastard rebuilt the town over the following 30 years and the town centre features Georgian architecture from the 1730s to 1760s. 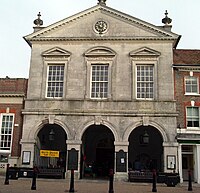 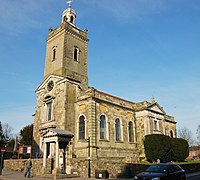 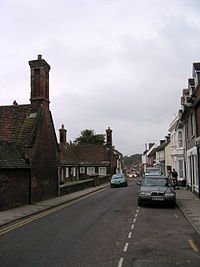 Almshouses at the top end of town

From 1860 to 1964, Blandford Forum was an important stop on the Somerset and Dorset Joint Railway, which ran from Bath in Somerset to Bournemouth in Hampshire. The line closed to passengers though in 1966. Located between Templecombe and Broadstone, the railway was still open until the closure of the Blandford's goods yard in 1969, after which the track was lifted. The station was immortalised in 1964 in the song "Slow Train" by Flanders and Swann.

Blandford Forum is often given as an example of a Georgian town, as the entire centre was rebuilt at once in the 18th century, due to the fire of 1731, and is hence uniformly Georgian. All facades remain in fair to good condition, and notable buildings include the Corn Exchange, and the 1732 parish church of St Peter and St Paul, a classical building with a cupola on top of the tower. The interior remains relatively unaffected by Victorian interference and retains its galleries, font, pulpit, box-pews and mayoral seat. In 1893 the church was enlarged by moving the apsidal sanctuary out on rollers onto new foundations and building a new chancel behind it.[3]

To the south of the town a six-arch stone bridge spans the River Stour.

The local district council employs a large number of residents at its headquarters in the town. Other employers in nearby parishes are the Hall & Woodhouse (Badger) Brewery, which supplies beer to public houses across the region, and the supermarkets.

There are a number of busy industrial estates (with, for example, builder's supply yards) on the bypass road to the North-East of Blandford.

The early 21st century saw a number of private housing development projects in and around Blandford. These developments were built with traditional architectural styles.

Blandford Camp is a mile and a half north-east of the town and has long been home to the Royal Corps of Signals, the communications wing of the Army. The base incorporates a modern technology training college plus a cinema for military personnel.

The National Signals Museum is also here; a museum of items relating to the history of the Royal Signals since its inception, which is open to the public. The museum contains many items of interest including uniforms, medals, signals equipment, and an Enigma cryptographic machine, used to produce German high level ciphers during World War II but cracked by the Allies.

A Georgian Fayre is held in the first week of May every other year in the town centre and attracts thousands of visitors. The Fayre combines Georgian celebrations with cultural presentations, stalls, and a fun fair on the meadows along the banks of the Stour.

An unpleasant local resident is 'The Blandford Fly', a biting insect. In recent years the weed beds in the river have been sprayed to stop it breeding.[4]

Blandford features in Thomas Hardy's novels as the Wessex town of "Shottesford Forum".

In 1590, Edmund Spenser mentioned the town in The Faerie Queene.

Blandford Forum railway station, which is now gone as the line to Blandford was removed in the 1960s, was mentioned in the song "Slow Train" by Flanders and Swann.