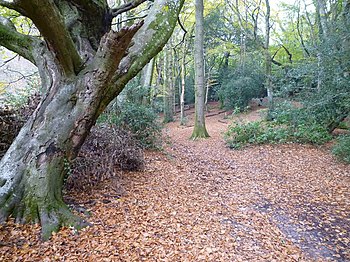 The Hardy Way in Puddletown Forest

The Hardy Way is a waymarked long-distance walking route of 220 miles running all around Dorset, with a brief excursion into the edge of Wiltshire. It was devised in honour of the author Thomas Hardy, who so richly described the landscapes of the county and many of the places appearing in his novels or his own life-story are found along the route.

Thomas Hardy's Wessex claimed a fictional landscape across much of the West Country, but the places in which the novels were set were almost all in 'South Wessex': Dorset in the real world. They are recognisable places, with fictionalised names: as the path enters Dorchester, this is Hardy's 'Casterbridge' (in The Mayor of Casterbridge, Tess of the d'Urbervilles, Far From the Madding Crowd). It reaches Lulworth Cove where Sergeant Troy was swept out to see and where Hardy in a vision sees Keats sets sail. It runs through Bere Regis ('Kingsbere' in The Wodlanders), and many others. 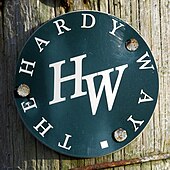 Waymark on the Hardy Way

The starts point is Higher Bockhampton, where Hardy was born. It and finishes at Stinsford churchyard, where Hardy's heart lies buried, just over a mile from the start.

The route passes all around Dorset and takes in along the route such villages and towns as Bere Regis, Lulworth Cove, Corfe Castle, Shaftesbury, Evershot and the county town, Dorchester.

Towns, villages and sights on the route in turn are: