From Wikishire
(Redirected from Wimborne)
Jump to: navigation, search

Wimborne Minster (known locally simply as Wimborne) is a market town in Dorset, whose name is taken from the parish church, a minster before the Reformation. The town stands where the Rivers Stour and Allen meet, five miles north of Poole.

The town has a well-established and large market held on a Friday, Saturday and Sunday. The market was previously located in the Town Centre but moved out several years ago to a site on the edge of town to accommodate its size.[1]

The name of the town takes the suffix "minster" from the parish church, which was a monastic church before the Reformation. The church stands in the centre of the town and provides its focus.

(Another Wimborne in Dorset is Wimborne St Giles, 8 miles away to the north, also on the River Allen.)

The historically important aerospace company Cobham plc has headquarters in Wimborne and employs a large proportion of its residents. The economy of the main town is dedicated towards Leisure and has many shops, restaurants and pubs. Tourism is an important aspect in the town's economy.

The architecture of Wimborne is regarded as one of the foremost collections of 15th, 16th and 17th century buildings in Dorset. Local planning has restricted the construction of new buildings in areas such as the Corn Market and the High Street, which has preserved almost all of the original buildings.

The most interesting examples of English architecture include the centuries-old Wimborne Minster, the Town Hall, the Priest's House Museum and dozens of original 16th, 17th and 18th century fronted shops and pubs. The town is also home to the Tivoli Theatre, a 1930s art deco cinema and theatre. 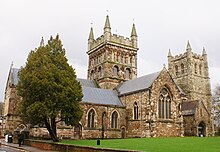 Wimborne Minster is an Anglo-Saxon Church, with Norman and Gothic architecture. It is famed for its chained library and for holding the tombs of King Ethelred I, the brother of Alfred the Great, and of John Beaufort, Duke of Somerset, and his duchess, the maternal grandparents of King Henry VII.[2]

Beaufort's tomb is hewn of Dorset limestone and New Forest stone; a tough memorial for a family which was to refound the Royal House.

The model town is one of the largest and most established model towns in Britain. It depicts Wimborne itself at the time it was made, in the 1950s. It is at 1:10 scale, so the model of the Minster is several feet high. The shop windows accurately show the goods the shops were selling at the time. The exhibition also includes a model railway based on Thomas the Tank Engine, which was opened by Christopher Awdry. Activities for children are provided.

On weekends and national holidays, the town crier can be seen and heard in the main square and around the Minster.[3] The office of the town crier dates back to the Civil War.

The town has a large civil war re-enactment society, which performs every year.

"Alive in the Park", held every two years in mid-August on Leigh Park estate, is a community event. It is held in a large marqee erected in the centre of the estate. The event is organised by The Park Initiative, an inter-church charity working on the estate.[4]

Wimborne Minster was winner of the regional Britain in Bloom Awards and Silver Gilt medallist in the national competition.[5] The town welcomes visitors each summer with a display of flowers in six large gardened areas of the town.

Every year Wimborne hosts the longest fireworks display in Dorset, as part of its Guy Fawkes celebrations; a county record that it has held for the last seven years. The display is held each year in the grounds of St Michael's Church of England Middle School and is well supported by many thousands of people from the town, Colehill village and the surrounding area. All proceeds are donated each year to local schools, and since 2004 over £51,000 has been raised for local school projects and equipment.[6] 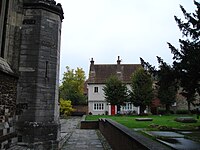 The close around the Minster

Every summer in June the town holds the Wimborne Folk Festival.[7] Founded in 1980, the annual event of Traditional Folk Dance and Song has become the focal point for the largest gathering of dance teams and musicians in the south of England. The festival is considered by many to be the town's major event of the year and is highly regarded nationally as one of the largest events of its kind in the country.[8] The festival involves Morris Dancing. The regional festival is attended by over 15,000 people across its weekend with parts of the town being closed to traffic.