Burnsall is a village and parish in the Staincliffe Wapentake of the West Riding of Yorkshire. It is situated on the River Wharfe in Wharfedale, and is in the Yorkshire Dales National Park. 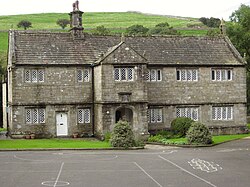 The village is approximately two miles south-east from Grassington. It has a parish church, a chapel, two hotels with restaurants, a public house, and a primary school. The school, Grade-II listed, is in the original 1602 grammar school building, a legacy of William Craven of nearby Appletreewick.[2] There is a five-arched bridge over which the Dales Way passes. A path along the river from Burnsall to Hebden, a mile to the north-west, dates to Viking times.[3] The 2001 Census gave Burnsall parish a population of 112 increasing to 110 at the 2011 census.[4]

The ancient parish of Burnsall occupies a large part of upper Wharfedale. It includes the townships of Appletreewick, Bordley, Conistone, Cracoe, Hartlington, Hetton, Kilnsey, Rylstone and Thorpe, all of which became separate civil parishes in 1866.[5]

The ecclesiastical parish of Burnsall is in the Diocese of Leeds.[6] The parish church of St Wilfrid's, a Grade-I listed building, is almost entirely Perpendicular. It contains an 11th-century font carved with bird and beasts, twelve Anglo-Saxon sculpture fragments and a 14th-century alabaster panel depicting the Adoration of the Magi.[7] The church-yard is entered from the main road by a lychgate.

Burnsall is a centre for walking,[8] trout fishing, picnics, and weddings. An annual feast day games in August includes amateur competitions, tug of war and fell races.[9] The village cricket pitch is below Burnsall Fell and is half enclosed by the river.