Conistone is a small village in the Staincliffe Wapentake of the West Riding of Yorkshire. It lies three miles north of Grassington, the same distance south of Kettlewell and 12 miles north of Skipton beside the River Wharfe, in Upper Wharfedale.[1] Conistone With Kilnsey is a township of the large ancient parish of Burnsall, becoming a civil parish in 1866.[2] 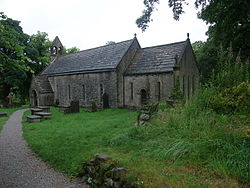 Conistone is mentioned in the Domesday Book as Cunestune and belonging to Ketil.[3] The name derives from a mix of Old Danish (Kunung) and Old English (tūn), which means King's farm or Settlement.[4]

The village is set in characteristic limestone scenery, including Mossdale Caverns, the dry gorge of Conistone Dib and the limestone outcrop of Conistone Pie.[5] Above the Dib the Dales Way path connects Kettlewell, to its north, and Grassington, to its south, providing distant views over Wharfedale.[6] From the B6160 road, the Wharfe is crossed at Conistone by a stone-arch bridge,[7] which is within easy walking distance of Kilnsey, with its Crag.

The parish church, St Mary's, dates from the 11th or 12th century, and is a Grade-II listed building.[8]

Immediately to the east of the village lies Conistone Moor and Riggs Moor. The moorland here was known for its lead mines,[12] and also as being the furthest point in England from a road. Known by the Ordnance Survey as Pile of Stones, the point is on Riggs Moor and is found at 54°8’34"N, 1°57’31"W.[13]