From Wikishire
Jump to: navigation, search
Not to be confused with Hebden Bridge

Hebden is a small village in the West Riding of Yorkshire, one of four villages within the ecclesiastical parish of Linton. It lies near Grimwith Reservoir and Grassington, in Wharfedale, within the Yorkshire Dales National Park. In 2001 it had a population of 216 and 133 dwellings.

Hebden has a church, a chapel, a hotel and public house, a tea room, a community hall, a post-office and general store, and is well served by buses. Until 1983 it had its own primary school. Hebden straddles a cross roads. The main east-west B6265 road connects it with Grassington 2 a mile and a half to the west, and from there south to its market town of Skipton, 11½ miles from Hebden. To the east, the road crosses a fine bridge over Hebden Gill, built in 1827, and thence over the watershed to Pateley Bridge in Nidderdale, 8½ miles distant.

Main Street, forming the high street for the village, continues south as Mill Lane, towards the bank of the River Wharfe and the villages of Hartlington and Burnsall, the latter being just over 2 miles away. The road to the north runs to the small hamlet of Hole Bottom, from there continuing as a track onto Grassington Moor.

The village has its recognisable roots in the local manor, but during the 19th century it became a substantial industrial village with lead mining and cotton milling as the main industries. Since then it has reverted to a small rural community, and is now a focal point for walkers and cyclists wishing to enjoy the local countryside.

In 2006 the Yorkshire Dales National Park Authority designated Hebden as a Conservation Area.

Moorland to the north-east of the village

Hebden Beck rises on Grassington Moor 2½ miles from the village, but the main valley continues north as a dry valley, until it reaches Mossdale Caverns and the upper flanks of Great Whernside.

Two Bronze Age stone circles and remnants of huts on the moors above the village show that the area has been settled since earliest times,[1][2] and a hord of 33 Roman silver denari dating from 30 to 170 AD. An Iron Age or Romano-British settlement has also been tentatively identified on the banks of Gate Up Gill on the moors to the north-west of the village.[3]

Hebden bears an English name but nearby place names such as Scale Haw show that the Norse left their influence.[4] Hebden does not appear in the written record until a brief mention in the Domesday Book of 1086, in which it is listed as Hebedene.[5] It was at that time, part of the lands of Osbern d'Arques, of Thorpe Arch.

Hebden was originally a township in the parish of Linton, part of the east division of the Staincliffe Wapentake. It became a separate civil parish in 1866.

During mediæval times, an important east-west droving route, which was used to move sheep between winter pastures around Fountains Abbey and summer pastures around Malham, crossed Hebden Beck at Hebden.[6] This droving route broadly followed the line of the North Craven Fault, thereby avoiding the moorland peat bogs, and it became a busy packhorse route for traders.[7]

Although no property within the village is older than the early 17th century,[8] its layout reflects its development in mediæval times as a planned village. Eight toft compartments are still discernible to the west of Main Street, and the outline of the four surrounding common fields, now divided, may be identified from the pattern of dry stone walls.[9] These fields were then largely arable, providing the village with most of its food requirements, but are now farmed exclusively for pasture and hay. The Hebden Beck just above the River Wharfe drove a mill in the Middle Ages,[10] and corn milling survived into the middle of the 19th century.[11] In the 14th century Fountains Abbey had a fulling mill in the village.[12] At the end of the 18th century a cotton mill was built alongside the corn mill, and this was productive until 1870 when it was eventually driven out of business by the more efficient stream-driven machinery of the Industrial Revolution. At its peak, the mill employed over 70 men, women, and children. The building continued to fulfil a variety of roles, including a roller skating rink, but was eventually demolished in 1967.[13]

Lead mining on Grassington Moor became important in the 18th century,[14] and from the early 19th century Hebden served as a dormitory village for some of the miners, helping the population rise to over 500 in the 1830s.[15] As a result of the success of the mines a number of the mine owners were involved in the promotion of the Grassington to Pately Bridge turnpike, which was begun in 1760 and was to provide an all-weather route across the moors for wagons.[16][17] In the early 1850s profitable mines were established within the parish to the north of the village on veins associated with Grassington Moor,[18] which helped sustain the population. However, although activity continued sporadically into the last decade of the century, the accessible ore was largely exhausted by 1865, and the population steadily declined to a low of 199 in 1901.[19]

As the freeholders shared the mineral royalties,[20] the mines brought prosperity which gave rise to the remodelling and redevelopment of much of the village. Green Terrace, which includes the Post Office, was built in the 1870s, and Main Street was transformed from a humble back lane into the high street.[21] The village school, with working clock and bell tower, was built by the community in 1874,[20] and the Ibbotson Institute, a well-built stone building which serves as a community hall, was completed in 1903.[22]

The opening of the Yorkshire Dales Railway to Threshfield in 1902 opened up Hebden as a destination for both day visitors and holidaymakers. A purpose-built timber guest house opened in 1909 at the south end of the village to cater for the new demand, and it continued in business, mainly catering for school parties, until 1990.[23]

Sights of the villageand walks around about

Suspension bridge across the Wharfe

Hebden is a popular centre for walkers and cyclists in Upper Wharfedale. It has an inn,[24] a shop, and a tea room to help meet the needs of its many visitors,[25] and within easy walking distance are the attractive Dales villages of Appletreewick, Burnsall, Thorpe, Linton and Grassington.

The village has a post box outside the post office was painted gold in 2012, to commemorate the 2012 Olympic Games rowing gold medal won by Andrew Triggs Hodge, who grew up in the village.[26]

Grimwith Reservoir, popular with wind surfers, dinghy sailors, and bird watchers is 2 miles to the east along the B6265, and a further 2 miles brings one to Stump Cross Caverns, a show cave.

Because of its proximity to the Craven Fault, the scenery is remarkably varied. The Dales Way[27] passes through the parish as it follows the banks of the River Wharfe between Burnsall and Grassington, mainly through peaceful limestone pastures but occasionally, as at Loup Scar and Linton Falls, through limestone gorges and past waterfalls.

The Dales Way crosses the River Wharfe at Hebden by means of a wrapped steel-cable suspension bridge, a few yards upstream of a reconstructed course of mediæval stepping stones. The bridge was built in 1885 by local blacksmith William Bell, and paid for by public subscription. A construction of recycled materials, it originally featured a central supporting pier (the base of which can be seen in low water conditions), which was removed when the span was raised in 1937 following damage caused by a heavy flood.[28] The bridge has been well conserved and is a popular landmark on the river-side path.[29]

Hebden Beck flows down from Grassington Moor, which is dominated by the long-abandoned remains of the lead mining industry, through a splendidly rugged and wooded gill, past the small hamlet of Hole Bottom, made famous by William Riley's novel Jerry and Ben, and thence over the attractive 16-foot Scala Falls.[30]

South of Hebden, the edge of the limestone is heralded by a number of text-book examples of reef knolls, including Elbolton Hill, Stebden Hill, and Kail Hill depicted below, which are the conical remnants of limestone reef structures.[32] Behind the reef knolls lies a large expanse of Grassington Grit grouse moor, Thorpe Fell and Burnsall Fell, where further walking may be enjoyed - especially around the edges.

St Peter's Church is chapel of ease for the village consecrated in 1841, within the Parish of Linton,[33] of which the parish church is St Michael and All Angels in Linton, a mile and a half away. Until St Peter's was built, the folk of Hebden had to walk to church across fields to a set of stepping stones crossing the Wharfe.[34]

St Peter's was built on land donated by the Rev Henry Bailey, and was designed by its curate, the Rev. John Feron, in the Gothic Revival style.[35] It is a Grade II listed building.[36] Its pipe organ was built by Harrison & Harrison of Durham and was installed in 1895.

Churches in the village include:

Because the congregation is small, the Anglicans and Methodists share a single service on Sundays, alternating between the venues.[37] 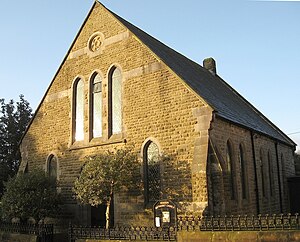 Hebden Fell Race has been held since at least 1922,[39] which was a regular feature on the British Open Fell Runners Association calendar until 2013.