Collingham is a village and parish in the West Riding of Yorkshire, two miles south-east of Wetherby. The population of the civil parish as of the 2011 census was 2,991.[1]

The Half Moon Inn public house is said to be where Oliver Cromwell spent the night after the Battle of Marston Moor.[2][3] The clergyman, the Reverend William Mompesson was born there in 1639.[4]

The village is at the junction of the A58 and A659 roads. It is separated from Linton to the north by the River Wharfe and linked to it via Linton Bridge. Wetherby to the north east is accessed via Linton or the A58 road from Leeds. The A659 road to Harewood crosses the Collingham Beck, a tributary of the Wharfe, over the listed Collingham Bridge. To the east is access to the A1(M) motorway and Boston Spa.

Collingham has had problems with flooding and was affected by the 2007 UK Floods. Collingham Beck has a tendency to swell very quickly. During the 2007 UK Floods it flooded Millbeck Green and the A58 Leeds Road reaching the boundaries of the Half Moon and Old Star public houses.

Collingham Bridge railway station was on the Cross Gates to Wetherby Line. It was named after the bridge over the nearby beck to avoid confusion with Collingham railway station in Nottinghamshire and was the station before Wetherby. The railway bridge over the River Wharfe, which was adjacent to Linton Bridge was demolished in 1965 when the railway was dismantled. Collingham is served by the X98 and X99 bus services between Leeds City Square and Wetherby Deighton Bar. 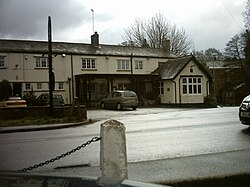 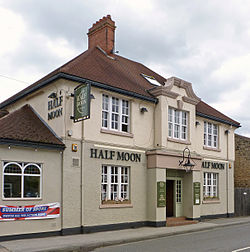 The village has a public house, The Half Moon on Harewood Road, and an Italian restaurant, Picolino on High Street. The former Old Star pub and restaurant is now a Tesco Express.

Elizabeth Court, a small modern shopping precinct, houses most of the village shops, a barbers shop, an off licence, fish and chip shop, travel agency, pharmacy, delicatessen, clothes shop, a bathroom shop, a dentist and a dry cleaner. Adjacent is a small parade of shops containing a convenience store and a newsagent and the post office. The GP surgery provides NHS services.

Lady Elizabeth Hastings Church of England Primary School is located off the Harewood Road opposite the cricket pitch.[5]

St Oswald's Church is the Anglican parish church and there is a Methodist chapel. There are Catholic services in Bardsey and Wetherby. 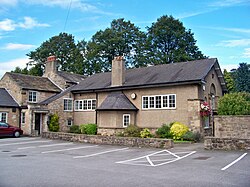 Much of the centre of Collingham was demolished in the 1960s and 1970s and replaced with modern facilities. However the Elizabeth Court Shopping Precinct in Collingham is stone-built and sympathetically styled. As part of this, many small shops and cottages were demolished, changing the character of the village. Some small cottages were purchased by the Half Moon public house, demolished and are now a large car park. The village has two churches. A large, stone Anglican church and a small, red-brick Methodist chapel. There is a 1960s-built primary school, a 1970s-built indoor squash courts.

It also includes the "Old Mill" built in stone which was first mentioned in the Domesday Book.

Collingham is home to Collingham and Linton Cricket Club which plays in the Airedale-Wharfedale Senior Cricket League.[6] This is located at the Collingham and Linton Sports Association (CALSA), which boasts three indoor squash courts, a football pitch and a cricket pitch. CALSA also has affiliated tennis and hockey sections.

Wetherby Golf Club extends all the way to the river at Collingham.

Collingham was also home to Percy Shaw, a professional boxer between 1932 and 1935. He had 11 professional contests during this time[7][8] and had a son called Philip Shaw.