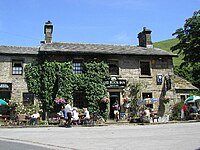 Buckden is a village in the West Riding of Yorkshire, within Wharfedale, one of the fairest of the renowned Yorkshire Dales. Buckden stand on on the River Wharfe itself.

According to the 2001 census, the village had a population of 184. It is situated where Buckden Gill, which rises on Buckden Pike, joins the River Wharfe. Up the Gill is an old, long disused, lead mine - Buckden Gavel Mine. The village has a large hotel, the Buck Inn, a village store, and a residential outdoor education centre - Buckden House.

One famous connection of the Buck Inn is that Lord Healey (Denis Healey) - the former Labour Chancellor of the Exchequer (1974–1979) spent his honeymoon staying in the barn that was then attached to the pub. This has since been converted to living accommodation.[1]

Footpaths lead from the village up to the top of Buckden Pike, up the river to Hubberholme and down the river to Kettlewell via Starbotton, and over the ridge opposite Buckden Pike to Litton, above Arncliffe, in Littondale.

Just up the dale, where Langstrothdale joins Wharfedale, is the old village of Hubberholme, noted for its Norman church and old inn.