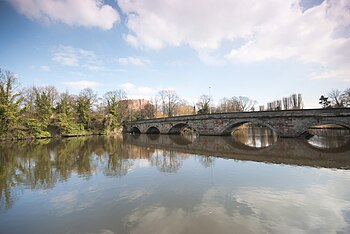 The Tame at Tamworth

The River Tame is a large river in Staffordshire and Warwickshire, forming the boundary between the two for some distance. It is the largest river in the Staffordshire Black Country and the most important tributary of the River Trent. The Tame is about 25 miles from it source at Oldbury in the Black Country to its meeting with the Trent near Alrewas.

The name of the Tame and its cognates are quite common in Britain: there are two rivers named Tames, as well as the River Thame (pronounced the same way), the Thames, the Team, Teme, Tamar and perhaps the Tees.

The name of all these rivers derives from the Old British language, although it may have even earlier roots. It is usually thought to mean "dark",[1] by analogy with the Sanskrit word tamas, meaning darkness. Other possibilities are "slow moving", or "flowing"[2] although the precise meaning is uncertain.

The Mercian Tribal Hidage records the Tomsæte'' ("Tame-dwellers") in the Midlands.

Sketchmap of the course and catchment of the River Tame

The Tame is generally considered to have two main sources; Willenhall and Oldbury. The tributaries arising in these locations are generally known as the Willenhall arm and the Oldbury arm of the Tame. However, some of its tributary streams rise as far to the west and north as Bilston and Wednesfield in the city of Wolverhampton. Much of the course of the river has been modified over the centuries and the urban sections now run mainly through culverts or canalised channels. Both arms of the Tame flow through the Staffordshire Black Country to their confluence at Bescot, on the edge of Walsall.

The Willenhall or Wolverhampton Arm

The northern arm is easily traced from Bentley, near Willenhall. However the SMURF project traces it back as far as Stow Heath, Bilston, where it is marked by a marshy patch at the northern end of the City of Wolverhampton College Wellington Road campus; hence, SMURF uses the term "Wolverhampton arm" for this section of the Tame. Victorian Ordnance Survey maps actually trace the sources of the Tame further back, to the site of the old Stow Heath colliery, which is now Wolverhampton's East Park.

The stream runs invisibly but generally north-east through Stowlawn, and then cuts across the southern edge of Willenhall, appearing briefly among the warehouses, and picking up reinforcement from the Waddens Brook, which originates in Wednesfield. It appears definitively at Bentley, whence it runs south through the industrial part of Bentley, before turning south-east, following a realigned course alongside and beneath the M6 motorway, to Bescot.

The southern arm appears prominently close to Oldbury town centre, which gives it its name, but can be traced back to an industrial area at Titford, just west of the M5 motorway, between Whiteheath and Langley Green. It winds its way up through Langley and around the southern and eastern edges of Oldbury town centre, surfacing due south of Sandwell and Dudley railway station, from which point it remains mainly on the surface and is easily traced. Bearing generally north-west, it skirts Brades Village and passes through Sheepwash Urban Park and Horseley Heath to the centre of Great Bridge. It then zig-zags across the southern and eastern parts of Wednesbury, to meet the Willenhall or Wolverhampton arm at Bescot.

The unified Tame flows, partly through channels realigned to make way for the M6 motorway and its interchange with the M5, through Sandwell Valley and north of Birmingham. It passes through Hamstead to Perry Barr, and then into Warwickshire.

The Tame flows through Witton, Warwickshire and beneath Spaghetti Junction (where it is fed by the River Rea) to Washwood Heath, here flowing in concrete channels among the decayed northern suburbs of Birmingham.

Skirting to the north of Castle Bromwich, the river turns to leave the conurbation in which all its course hitherto has been, flowing to the northeast at Park Hall Nature Reserve, passing Water Orton.

At Hams Hall, immediately after it is joined by with the River Blythe and the little River Bourne, the Tame turns sharply to take up a northward course, and soon feeds into the large complex of water purification lakes at Lea Marston that now make up Kingsbury Water Park and Middleton Lakes RSPB reserve in a wide valley between Drayton Bassett to the west and Dosthill to the east.

As it flows among the Middleton Lakes, the Tame becomes a border river, dividing Staffordshire to the west from Warwickshire to the east. It flows under ancient Watling Street to the east of Fazeley and under an aqueduct carrying the Coventry Canal. The river runs on north to Tamworth, which takes its name from the river.

At Tamworth the River Tame is joined by the River Anker immediately to the east of Lady Bridge beneath the strategically positioned Tamworth Castle and turns west into Staffordshire once more. The river continues its generally northward route past Hopwas, Comberford and Elford until it arrives at the National Memorial Arboretum where it forms the boundary between this and the Croxall Lakes Nature Reserve.

After Croxall the Tame flows under the railway at Wichnor Viaduct soon to discharge its waters into the River Trent near Alrewas, though here the Tame is in no way inferior to the Trent except in its preceding length.

The Tame is not navigable on any of its course.

The Tame and industry

The basin of the Tame covers an area of nearly 579 square miles and contains a population of about 1.7 million people. Approximately 42% of the Tame basin is urbanised, making it the most heavily-urbanised river basin in the United Kingdom.[3]

The traditional industries of Birmingham and the Black Country, based on coal, iron and steel, were heavily polluting, and the Tame is conducted through a series of purification lakes below Lea Marston, in Warwickshire, to remove pollutants, an arrangement unique in the United Kingdom.[4] A large part of this lake area forms the Kingsbury Water Park. Clean-up operations in a notoriously polluted stretch of the river in the Witton area of Birmingham have meant that aquatic wildfowl such as ducks and swans have settled on that stretch of the river. Sandwell Valley has evolved over the last two decades into an important urban wildlife habitat.

The Tame was once one of Britain's dirtiest rivers.[5] It is now much cleaner, due to changes in legislation and the use of purification lakes at Lea Marston.[5]

There have been major flooding problems associated with the river. These result largely from the mainly urban character of the upper catchment. Rainfall runs off the roofs and hard surfaces, raising river levels very rapidly. Rapid house-building and commercial development may have exacerbated the problem in recent years. Another development contributing to worse flooding has been the general rise in groundwater levels in the upper catchment area. As traditional industries have declined and been replaced by light industries and services, far less water has been taken from the river and the underlying aquifer.[6]

The river is susceptible to spectacular flooding at the village of Hopwas between Tamworth and Lichfield during periods of heavy autumnal rain. The long-term persistence of the problem is attested by the meaning of the village's name, which has been translated as "watery valley". There is also a substantial bend in the course of the river between Hopwas and Elford, giving rise to the name Tamhorn for the area. 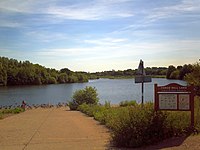 Flood prevention work was carried out on Sandwell Valley in the 1980s. Forge Mill Lake was created as a stormwater retention basin by enlarging an existing depression. The river was dredged to deepen it and the gravel used to construct an island in the lake.[7] This evolved into part of a nature reserve, at present leased to the Royal Society for the Protection of Birds. At about the same time,a similar arrangement was constructed at Sheepwash Urban Park, utilising old brickworks excavations as a storm water basin to relieve flooding by the Oldbury Arm.

In 2005, the river's alignment through Perry Hall Park in Perry Barr, just downstream of Sandwell Valley, was remodelled to slow the flow, alleviate flooding and create improved habitats for wildlife, as part of the SMURF (Sustainable Management of Urban Rivers and Floodplains) project. Nonetheless, in June 2007, after heavy rain, the river burst its banks in the Witton area of Birmingham (just downstream of Perry Barr)[8] and at Kingsbury Water Park.

In 2009, the Environment Agency held a public consultation on its proposed flood alleviation measures.[9] Subsequently, the Environment Agency undertook £380,000-worth of improvements, mainly involving dredging and clearing of obstacles.[10] 1000 tonnes of gravel were removed from around the Chester Road Bridge at Castle Vale and deposited further downstream to improve the fish spawning habitat. The Gravelly Hill section was relieved of 900 tonnes of silt and debris. The Oldbury Arm was cleared of debris and five weirs were removed from it to facilitate fish migration. Work under this programme continues into 2011, mainly around Water Orton.