From Wikishire
Jump to: navigation, search
Not to be confused with Bilston, Midlothian

Bilston is a town in Staffordshire, within the Black Country. It is southeast of Wolverhampton.

The town grew from a rural village into a town of heavy industry in the Industrial Revolution. Bilston was a place of steelworks, particularly famous for making heavy steel chains.

Industry has declined sharply since the War, and now Bilston is a poor town, better known for despair and crime of the worst sort despite, or because of, the best efforts outside agencies. 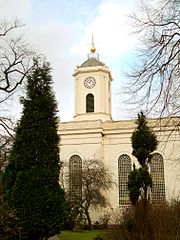 Christian worship in Bilston can be traced back to the original chapel dating from 1090. In 1458 the chapel was replaced by St Leonard's Chantry. And a third renovated church was consecrated in 1733. The modern church dates from a rebuilding of 1826 and is thus the fourth church on the same site.[1]

The church has a stunningly modern appearance being whitewashed inside and out, giving it a very neat and clean appearance compared to most English churches. In this respect it resembles many American and German churches and some of the Russian Orthodox Churches. It is also unusual in having a chamfered square tower, giving it an octagonal appearance, in being surmounted with a cupola, a golden globe with weather vane and a fenced viewing platform. These are all extremely unusual features rarely found in Britiish churches.

Bilston was first referred to in AD 985 as Bilsatena when Wolverhampton was granted to Wulfrun[2] then in 996 as Bilsetnatun in the grant charter of St. Mary's Church (now St Peter's Collegiate Church, Wolverhampton).[3][4] It is later mentioned in the Domesday Book as a village called Billestune, being a largely rural area until the 19th century. Bilsetnatun can be interpreted as meaning the ridge (bil) settlers' village.

Situated just two miles southeast of Wolverhampton, Bilston was extensively developed for factories and coal mining. Many houses were constructed in the Bilston area. Between 1920 and 1966, the council replaced most of the 19th century terraced houses with rented modern houses and flats on developments like Stowlawn, The Lunt and Bunker's Hill. Bilston has had a market in the town centre for many years.

Bilston Town Hall (pictured below in about 1900) has now been refurbished and re-opened. It had been derelict for more than a decade after Wolverhampton Council discontinued its use as housing offices. It is hoped that the town hall will be brought back into public use following the completion of its refurbishment. It dates back to the 19th century.

Few towns were more dramatically transformed during the Industrial Revolution as Bilston was. In 1800, it was still a largely rural area dependent on farming. By 1900, it was a busy town with numerous factories and coalmines, as well as a large number of houses that had been built to house the workers and their families.

With the opening of the Birmingham Canal to the west of the town in 1770, industrial activity in the local area increased, with the first blast furnaces near the canal at Spring Vale being erected by 1780. Six new blast furnaces were erected there between 1866 and 1883. Five of these were producing a total of nearly 25,000 tons of steel per year at what was now known as Bilston Steel Works. The first electric powered blast furnaces opened there in 1907, and finally in 1954 the "Elisabeth" blast furnace was erected, creating 275,000 tons of steel a year. However, by the 1970s the steel works had become uneconomic and the Labour government of James Callaghan decided to close it, with closure taking place on 12 April 1979. The iconic "Elisabeth" was demolished on 5 October 1980. Local unemployment, which had been steadily rising for some years, was pushed even higher by the plant's closure.[6]

The industry remained prolific during the interwar years, but much of the housing was now sub-standard, and during the 1920s and 1930s many of the older houses were cleared and replaced by new council houses that featured so many modern conveniences that were previously unknown to their occupants. Many of these houses were built on new housing estates previously occupied by coalfields or farmland, though some were built on the sites of older houses.

The council housing revolution in Bilston continued after the Second World War.

By the end of the 1970s, almost all of the sub-standard housing in Bilston had been cleared, but the area was in the early stages of an industrial decline which put hundreds of local people out of work and saw unemployment reach its highest levels in living memory. Things have improved over the last 20 years with more businesses in the service sector setting up around Bilston, but unemployment is still higher than the local average.

From 1850 to 1972 there was a railway station in Bilston town centre, but passenger services were then withdrawn and the line via Bilston (from Wolverhampton Low Level to Birmingham Snow Hill) had been almost completely abandoned within a decade. The final stub of the railway, connecting a town centre scrapyard with the South Staffordshire Line at Wednesbury, closed in 1992, only to be re-opened seven years later as the first phase of the Midland Metro tram line between Wolverhampton and Birmingham.

There was also a further railway station within the town: Bilston West on the Oxford-Worcester-Wolverhampton Line.

The A463 Black Country Route was opened in phases between 1986 and 1995 and gave Bilston quick road links to important towns such as Dudley and Walsall, and the opening of the Midland Metro tram line in 1999, which gives a speedy public transport link to Wolverhampton and Birmingham.

With more and more cars on the road, the roads around Bilston town centre became increasingly congested as the twentieth century progressed. It became so severe that, by the late 1960s, the government had drawn up plans for a new motorway bypassing Bilston (and running from the A4123 near Coseley to Junction 10 of the M6 motorway at Walsall), which was scheduled to be completed by 1976. However, the plans collapsed and Bilston was condemned to increased congestion, for another decade at least.

The plans for a new dual carriageway were revived in the early 1980s. This time the planners had decided on a slightly different route, which would run much closer to Bilston town centre. The first phase of the road (to be known as Black County Route) was completed in 1986, though initially running around half a mile east of the A4123. It was extended in 1990 to Oxford Street in Bilston town centre. This expansion resulted in a number of buildings being demolished and some roads having to be re-routed while one road (Market Street) was completely obliterated. This new road changed the face of Bilston town centre forever. 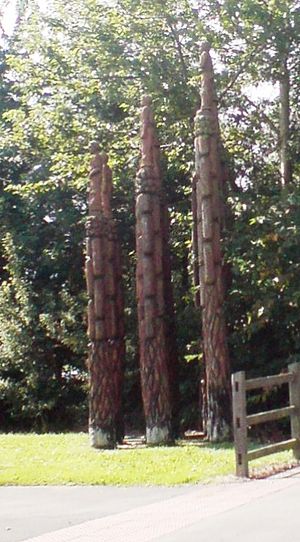 Steel columns at Bilston by Robert Koenig. viewed from the side, August 2008

At the Bilston end of the Black Country Route can be seen the group of wooden statues designed by Robert Koenig and called "Steel Columns." "This sculpture was made from 15 lengths of sweet chestnut which stretch up to 20 feet in height. The male and female figures depicted are based on those found in old Victorian photographs of Bilston. The title Steel Columns is a reference to Bilston's steel making background and the connection the figures had with this history."[7]

Art and craft works of local significance from the eighteenth century are displayed at Bilston Craft Gallery, which also has a temporary exhibition space where local art and crafts are often displayed.

The artist William Harold Dudley as born in Bilston; several of his works are in the collection of Wolverhampton Art Gallery.