Wednesfield is a town in Staffordshire, within the northern edge of the Black Country conurbation. It is 2 miles east-northeast of Wolverhampton city centre. The town's name echoes that of another town of the Staffordshire Black Country' Wednesbury, four miles to the south.

The town's name comes from the Old English Wodnesfeld meaning Woden's Field, and thus is it one of the few town names in Britain known to come from that of a pagan deity.

It is reported by the English Dialectal Society in the publication "A Glossary of dialectal place-nomenclature" available on-line in the Internet Archive of The University of Toronto Library, that the place name "Wednesfield" is pronounced by the local populace as "Wencefield". Indeed, The 1871 Census enumerators have used the name "Wedgefield" rather than "Wednesfield" when recording the place of birth of some of those persons enumerated.

The south of the town lies over coal measures whilst the town centre has dolerite deposits and the area to the north lies over mudstone and sandstone. The town lies on generally flat land between 130m and 140m above sea level, rising to around 170m in the north.[1][2][3]

There are no navigable rivers within the town, although the original course of the River Tame crossed the south-east of the town.[2]

The Church of St Thomas is located in the town centre. It was originally consecrated in August 1750, as a chapel of ease of St Peter's Collegiate Church in Wolverhampton and known as the Chapel of St Thomas in Wednesfield. It became a separate parish in 1849.

The church was almost completely destroyed by fire on 18 January 1902, as a result of which the tower is the only remaining part of the original building. The church was reconstructed in similar style to the original and continues in active use as a place of worship.[4]

Wednesfield was formerly well known for making all kinds of traps, from mousetraps, to mantraps and locks. Many of the factories that dominated the area have been cleared to make way for houses and other buildings.

Wednesfield Town Centre (or 'the village' as it is still referred to by many residents) provides a range of shopping, office and community facilities for residents in the north east of Wolverhampton and some adjoining suburbs along with services for the major industrial areas to the south of the town and New Cross Hospital. Just to the west of the town centre, there is a large Sainsbury's supermarket and the Bentley Bridge Retail Park. There is also a retail market.[5]

Bentley Bridge consistes of both leisure and retail components. The leisure component is in the form of a multiplex cinema and bowling alley together with fast food outlets, a pub, numerous restaurants, whilst there is 158,229 square feet of retail space which includes a fitness gym.

The proximity to Wolverhampton city centre has been a major constraint on retail economic growth within the town. Wednesfield is part of a network of lower order Black Country town centres, providing principally convenience shopping facilities for a local catchment area and it is surrounded by centres with a similar role including Bilston to the south, Willenhall to the south east and Bloxwich to the east.[5]

However, since 2009 the Bentley Bridge Retail Park has thrived with empty units being filled by national retailers. In September 2011 retailer TK Maxx announced plans to close its city centre store in Wolverhampton and relocate to Bentley Bridge.[6] Whilst the retail park thrives, local independent traders on the high street continue to suffer due to economic circumstances.

The area to the south of the former railway line is characterised by industrial development, mostly with small units although there is some larger development such a steel processing and distribution plant. Historically, the main industries were coal mining and trap making, although mining ceased in the area in the early twentieth century.[2]

The Wyrley and Essington Canal running through the town was opened in 1797. It was constructed to allow coal traffic to travel between mines near Great Wyrley and Wolverhampton, and was constructed following the contours of the land. This meant that the centre of the town was surrounded on three sides by the canal, and that almost all of the pre-existing roads required hump-backed bridges, and despite the improvement in communications and the potential for transporting goods via the canal, it is recorded that some local residents felt that it actually obstructed the development of the town, rather than assisting it.[7] A second canal through the town, the Bentley Canal, opened in 1843 between Wednesfield Junction, near the modern New Cross Hospital, and Walsall. The canal was abandoned in the 1960s,[8] and only a short section at Wednesfield Junction is extant. 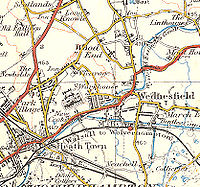 Wednesfield railway station on the Wolverhampton and Walsall Railway was opened in 1872, connecting the town with Wolverhampton High Level and Walsall. It was operated by the Midland Railway, and was located on Neachells Lane to the south of the town centre.[9] It closed to passenger traffic in 1931, although it remained open for goods traffic until the 1980s.[10] Much of the trackbed was reused for the A4124 Wednesfield Way, which bypasses the town centre and opened in 1999.[5]

The first railway within the township was the Grand Junction Railway, where Wednesfield Heath railway station (opened in 1837) was the primary station for Wolverhampton, and was located on Station Road, Heath Town. The station was replaced by Wolverhampton High Level in the city centre, and closed to passengers in 1873 whilst remaining open for goods traffic until 1965.[11] The siting of this station at Heath Town has been cited as a reason for the separation of Wednesfield and Heath Town.[7]

An extension of the Midland Metro through Wednesfield is planned, on the "5Ws" route from Wolverhampton to Wednesbury by way of Willenhall and Walsall.[5]