Alrewas is a village and parish in Staffordshire, adjacent to the border with Derbyshire. The village is beside the River Trent and about five miles north-east of Lichfield. The parish is bounded by the Trent to the north and east, and by field boundaries to the south and west. The A38 road passes the village, which is just inside the boundary of the National Forest. 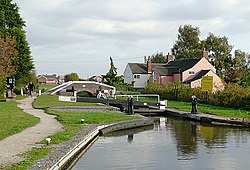 The A38 dual carriageway follows the line of Ryknild Street, a Roman road that linked what are now Gloucestershire and Yorkshire.

Orgreave Hall is a brick-built country house in Alrewas parish about 1¼ miles north-west of the village. It was built in 1668 and extended in the early 18th century.[3]

The Trent and Mersey Canal was built between 1766 and 1777. It passes through Alrewas, where north-east of the village it has a junction with the River Trent.

East of Alrewas is the National Memorial Arboretum, dedicated to remembering those lost due to warfare since the Second World War. 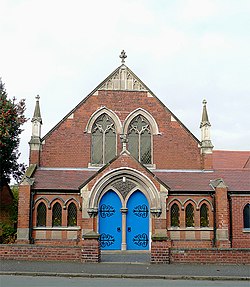 The Church of England parish church is All Saints in Church Lane. The oldest parts of the building are 12th-century. Some Norman work remains but much of the present building is Gothic from the 13th, 14th and 16th centuries. The font is 15th-century. The pulpit is Jacobean, made in 1639. There is a monument by Thomas White to John Turton, who died in 1707. The church was restored in 1997. All Saints' is a Grade-I-listed building.[4]

The Methodist Church is in Post Office Road opposite the Crown Inn. It is a Gothic Revival brick building completed in 1928. In 1989 due to rot the roof was renewed. At the same time a new floor was laid, involving the removal of pews and organ. 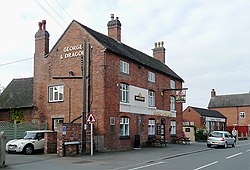 The George and Dragon

The Delhi Divan is a South Asian restaurant in Kings Bromley Road beside Bagnall Lock on the canal.[7] It used to be a pub, formerly called the Navigation and latterly The Old Boat. Alrewas has also a fish and chip shop and a Cantonese takeaway. 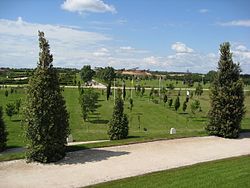 Part of the National Memorial Arboretum

The National Memorial Arboretum is at Alrewas. It "honours the fallen, recognises service and sacrifice, and fosters pride in our country". The Arboretum is a charity run by staff and volunteers, and part of The Royal British Legion group of charities. An Act of Remembrance, including a silence, is observed daily in the Millennium Chapel. The Arboretum receives about 300,000 visitors a year.

The village holds the biennial Alrewas Festival every other summer. It is an eight-day free festival that includes workshops, performances, exhibitions and events in Alrewas village. It features local artistic and artisan talents. The workshops range from silk painting to film making. There is fund raising including auctions and sales to meet the festival's costs. It culminates in a Sunday daytime to evening event of live music, comedy and interactive arts in Alrewas Park that attracts thousands of party-goers from surrounding villages and towns.

Alrewas has several vernacular timber-framed houses. Shakespeare Cottage in Main Street was built in the 17th century and extended in the 19th.[8]