Birlingham is a village and parish in the Pershore Hundred of Worcestershire. The village is south of Pershore itself, located in a bend of the River Avon. 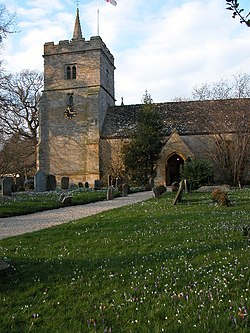 Church of St James the Great

The name Birlingham is derived from the Old English Byrla–inga–hamm, meaning "Land, in a river-bend, of a man called Byrla". It has been recorded as Byrlingahamm (972) and Berlingeham (1086, Domesday Book).[1]

Romans are believed to have settled in Birlingham during the Roman occupation of Britain, suggested by the discovery of a Roman brooch within the village. It is possible that there was a crossing point near the village at Swans Neck, though no evidence has been found of this.[2]

The Swan Inn, the village's public house, is believed to date back to the 16th century.[3]

Birlingham is surrounded on the north, south and east sides by a river-bend known as Swans Neck, part of the River Avon. The village is located on a floodplain.[4] Bow Brook passes by the village's west side.

Nearby villages include Defford and Eckington. 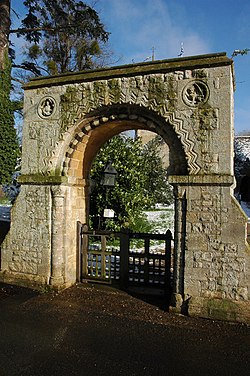 Birlingham is served by the church of St James the Great, located in the Anglican Diocese of Worcester. The original church was built in the 12th century, with its chancel arch now located outside as the churchyard's entrance. The current west tower was built in the 15th century, the rest of the church being rebuilt around the 1870s by Rev Robert Rashleigh Duke.[8][9]

This Worcestershire article is a stub: help to improve Wikishire by building it up.
Retrieved from "https://wikishire.co.uk/w/index.php?title=Birlingham&oldid=72589"
Categories: