Strensham is a village and parish in the Pershore Hundred of Worcestershire. In the 2001 census, the civil parish of Strensham had a population of 314 across 127 households. Since 1991, the population has risen 28.7% from 244 residents. 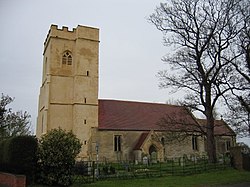 The Church of St John the Baptist lies in Lower Strensham atop a hill overlooking the River Avon, constructed in the 14th century.[1]

Strensham was once part of the Royal forest of Horewell. The woodlands were mostly removed around the time of the Civil War.[2]

The eastern edge of the parish lies on the banks of the River Avon, while the River Severn is two miles to the west. Both rivers converge four miles to the south in the Gloucestershire town of Tewkesbury.

Nearby villages include Twyning, Bredon, Eckington and Ripple. The town of Upton-upon-Severn lies three miles to the north west.

The village gives its name to a motorway service area located just to the North of the village on the M5 motorway which opened with the motorway in 1962.[3] The Midlands Air Ambulance service has been operating one of its helicopters from the services site since 1991 following a deal with the then operator, Take a Break.[4]

Strensham Court was an early 19th-century country house in a landscaped park. It was built of ashlar in two storeys to a rectangular plan. A substantial portico was added later with large Ionic pillars.[5]

The manor of Strensham belonged historically to the Russell family. The Strensham estate was purchased in 1817 from descendants of the Russell family by John Taylor, grandson of John Taylor, the wealthy Birmingham industrialist. He had a new building constructed in 1824 to replace an earlier house on the site.[6] Taylor was High Sheriff of Worcestershire in 1817 and died unmarried in 1848. The property passed to his brother James who died soon after, then to James's son James Arthur (MP, died 1889) and to the latter's son Arthur James.[7]