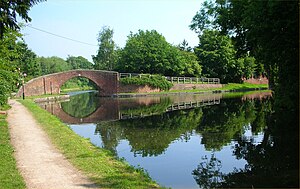 Kings Norton Junction and roving bridge over the Worcester and Birmingham Canal. The start of the Stratford-upon-Avon Canal is at the top right

The Avon Ring is a canal ring which is located to the south-west of Birmingham, and connects the major towns of Stratford-upon-Avon, Evesham, Tewkesbury, Worcester and the southern outskirts of Birmingham. It consists of stretches of four waterways, and is heavily locked, with a total of 129 locks on its route of 109 miles.

The concept of a canal ring is a recent one, having been coined in the 1960s to describe routes which could be used by people boating for leisure, that did not require holiday makers to return to their start location by the same route as they had used to reach their destination. The constituent waterways of the Avon Ring are:

Starting from Stratford-upon-Avon, and travelling in a clockwise direction, the Avon Ring follows the downstream course of the River Avon through Evesham to arrive at Tewkesbury, where the river joins the River Severn. There are 17 locks on this 42¼-mile section, ten before Evesham and seven afterwards. The River Avon is a navigation, and so each lock is accompanied by a weir, to maintain the flow of the river.[1]

From Tewkesbury, the ring follows the upstream course of the River Severn for 16 miles to Worcester.[2] This is the longest level section, as the only lock is located at Diglis, just before the junction with the Worcester and Birmingham Canal.[3]

From the junction with the River Severn, there are two locks to reach Diglis Basin, and then another eight as the canal leaves Worcester. The Offerton flight of six locks follows, just before the canal passes under the M5 motorway,[4] after which the 230-yd Dunhampstead tunnel is encountered. A junction with the Droitwich Canal, which was restored to navigation in 2011, is followed by the six locks of the Astwood flight,[5] another six at Stoke, and almost immediately, the thirty locks of the Tardebigge flight, which raise the level of the canal by 217 ft. The top lock of the flight brings to 58 the number of locks worked in just 15½ miles, as the final section is level. Two short tunnels follow; Tardebigge tunnel is 580 yds long and Shortwood tunnel is 613 yds long.[6] The canal meanders across rural Worcestershire, passing under the M42 motorway just to the north of Alvechurch, before entering the Wast Hills tunnel. The tunnel is 2,726 yds long,[7] and its northern portal is in the urban outskirts of Birmingham. Within a mile, Kings Norton junction is reached, where the Stratford-upon-Avon Canal begins,[8] and the 24½-mile journey up the Worcester and Birmingham Canal ends.[9] 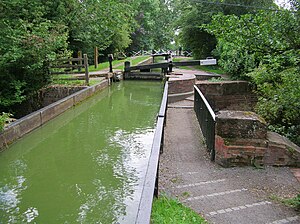 Yarningdale aqueduct on the Stratford-upon-Avon Canal

The start of the Stratford-upon-Avon canal is marked by a guillotine lock, which used to prevent water passing between the canals, but is now maintained in an open position. The first eleven miles is level, with a five-mile urban section containing the 352-yd Brandwood tunnel,[10] and a six-mile rural section which passes under the M42 motorway. The 26 locks of the Lapwood flight start the descent towards Stratford-upon-Avon, with the final one in the shadow of the M40 motorway bridge. The Lapworth Link turns off near locks 20 and 21, to connect with the Grand Union Canal. Only one of these two locks needs to be negotiated, as they are on parallel routes.[11] Another 27 locks complete the journey to Stratford-upon-Avon,[12] with eleven of them concentrated in the Wilmcote flight.[13] The length of the canal is 25½ miles, and officially contains 54 locks, although only 52 of them have to be negotiated.[14]