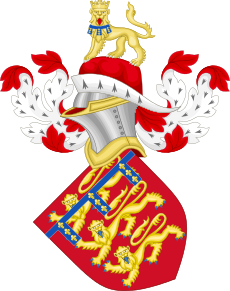 Arms of the Duchy of Lancaster

The Duchy of Lancaster is the private estate of the British sovereign as Duke of Lancaster,[1][2] a title joined to the Crown as a separate franchise since 1399. It also retains unique palatine rights in Lancashire.

The principal purpose of the estate today is to provide a source of independent income to the Sovereign.[2][3] The estate consists of a portfolio of lands, properties, and assets held in trust for the Sovereign, and is administered separately from the Crown Estate.[3] The duchy consists of 45,549 acres of land holdings (including rural estates and farmland), urban developments, historic buildings, and some commercial properties across England and Wales particularly in Cheshire, Staffordshire, Derbyshire, Lincolnshire, Yorkshire, Lancashire and the Savoy Estate in London, where the Duchy’s headquarters are found.[4] The Duchy of Lancaster is one of two royal duchies, the other being the Duchy of Cornwall, which provides income to the Prince of Wales.

In the financial year ending 31 March 2015, the estate was valued at circa £472 million.[5] The net income of the Duchy is paid to the reigning sovereign as Duke of Lancaster,[2] which represents approximately £16 million in annual revenues being presented to the Sovereign every year.[6] As the Duchy is an inalienable asset of the Crown held in trust for future generations of Sovereigns, the sovereign is not entitled to the portfolio's capital or capital profits.[2][5] The Duchy of Lancaster is not subject to tax,[6] although the sovereign has voluntarily paid both income and capital gains tax since 1993.[7] As such, the income received by the Privy Purse, of which income from the Duchy forms a significant part, is taxed once official expenditures have been deducted.[6]

The Duchy is administered on behalf of the Sovereign by the Chancellor of the Duchy of Lancaster, a government minister appointed by the sovereign on the advice of the Prime Minister, and the Clerk of the Council.[8] Day-to-day management of the estate's properties and investments are delegated to officers of the Duchy Council,[2][6] while the Chancellor is answerable to Parliament for the effective running of the estate.[9][10][11][12]

The County Palatine and royal prerogative 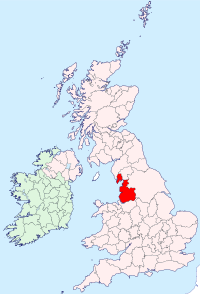 The Duchy enjoys certain extraordinary powers and ceremonial duties of the Crown in Lancashire,[14] Amongst these are the rights of escheat and bona vacantia: if a landowner dies without any heir and without leaving it by will, this ownerless land will escheat to the Crown in England and Wales in general, but in Lancashire it falls to the Duchy, as the immediate feudal superior. Likewise in Cornwall ownerless land escheats to the Duchy of Cornwall.

Proceeds from bona vacantia in the Duchy are in fact divided between two registered charities.[15] Escheat arises from the feudal landholding system, whereby landlowners are technically tenants in chief holding lands from the Crown, but in Lancashire from the Duke of Lancaster. Bona vacantia and escheat arise in origin by virtue of the Royal Prerogative but also now by statute.[16]

The Duchy formerly had its own courts in place of those of the Crown, but this privilege has been whittled away and vanished. The Duke of Lancaster could also appoint the sheriff and the Lord lieutenant in his county, though since shrievalties and lieutenancies have been moved to administrative areas, this privilege of the Duchy now falls to any administrative area which extends into Lancashire.[17] There is still a separate Attorney General for the Duchy.

The Duchy of Lancaster was created for a younger son of King Edward III, John of Gaunt, who acquired its constituent lands through marriage to the Lancaster heiress, Blanche of Lancaster. As the Lancaster inheritance it dates to 1265, when King Henry III granted his younger son, Edmund Crouchback, lands forfeited by Simon de Montfort, Earl of Leicester. In 1266, the estates of Robert de Ferrers, 6th Earl of Derby,[18] another protagonist in the Second Barons' War, were added.

In 1267 the estate was granted as the County, Honour and Castle of Lancaster. In 1284 Edmund was given the Manor of Savoy by his mother, Eleanor of Provence, the niece of the original grantee, Peter II, Count of Savoy. Edward III raised Lancashire into a county palatine in 1351, and the holder, Henry of Grosmont, Edmund's grandson, was created Duke of Lancaster. After his death a charter of 1362 conferred the dukedom on his son-in-law John of Gaunt, Earl of Lancaster, and the heirs male of his body lawfully begotten for ever.

In 1399, John of Gaunt died and his son and heir, Henry Bolinbroke, returned from banishment with an army to claim his father’s title and lands, but completed his campaign by imprisoning the King and seizing the crown as King Henry IV. His first act as king was to declare the Lancastrian inheritance be held separately from the other possessions of the Crown, and should descend to male heirs. This separation of identities was confirmed in 1461 by Edward IV when he incorporated the inheritance and the palatinate responsibilities under the title of the Duchy of Lancaster, and stipulated that it be held separate from other inheritances by him and his heirs. The Duchy thereafter passed to the reigning monarch and in 1760 its separate identity preserved it from being surrendered with the Crown Estates in exchange for the civil list. It is primarily a landed inheritance belonging to the reigning sovereign.

In 2011, the Duchy established a re-balancing asset plan and sold most of the Winmarleigh estates farms and donated a plot of land to the Winmarleigh Village Hall committee by June 2012.[19][20]

The duchy is the personal property of the monarch and has been since 1399, when Henry Bolinbroke captured both his paternal inheritance as Duke of Lancaster but also the Crown (after deposing King Richard II).

The chief officer is the Chancellor of the Duchy of Lancaster, a position sometimes held by a cabinet minister but always a ministerial post. For at least the last two centuries the estate has been run by a deputy; its chancellor has rarely had any significant duties pertaining to its management and is so named just to serve in the government as a minister without portfolio.

The monarch derives the privy purse from the revenues of the Duchy: the surplus for the year ended 31 March 2015 was £16 million and the Duchy was valued at just over £472 million.[21] Its land holdings are not to be confused with the Crown Estate, whose revenues have been handed to the Treasury since the 18th century in exchange for the receipt of a yearly civil list payment.

The Duchy Council's primary officers carrying out the estate's day-to-day duties are the Clerk of the Council (the Chief Executive Officer), the Chairman of the Council, and the Chief Finance Officer.[6] The chancellor is responsible for the appointment of the steward and the barmaster of the barmote courts on behalf of the Queen in right of Her Duchy.[22]

The holdings of the Duchy are divided into six units called surveys, five rural and one urban. The rural surveys make up most of the assets and area but the urban survey generates a greater income. The holdings were accrued over time through marriage, inheritance, gift and confiscation, and in modern times by purchase and sale.[4]