Malpas is a large village and parish, once a market town, in Cheshire. The ancient parish lies on the borders with Shropshire and Flintshire, with its chapelry of Iscoed lying in the latter county.

The name of the village is from Old French and means "bad [or poor] passage [or way]". 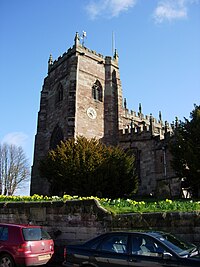 The village was once served by the Whitchurch and Tattenhall Railway or Chester-Whitchurch Branch Line. Malpas station was closed along with the entire line under the Beeching Axe in the 1960s.

Dedications to St Oswald are thought to be associated with Æthelræd II (879-911), also known as Earl Aethelred of Mercia and Æthelflæd of Mercia (911-918); they are known to have encouraged the growth of this cult along the Welsh border in places such as Hereford and Shrewsbury. This may indicate that Malpas was not a Norman 'New Town' as its name suggests, but an Anglo-Saxon burh.

After the Norman Conquest of 1066 Malpas is recorded as being called Depenbech and is mentioned in the Domesday Book of 1086 as belonging to Robert FitzHugh, Baron of Malpas. Malpas and other holdings were given to his family for defensive services along the Welsh border. The Cholmondeley family who still live locally at Cholmondeley Castle are reputed to be descended from Robert FitzHugh.

A concentrated line of castles protected Cheshire's western border from the Welsh princes; these included motte-and-bailey castles at Shotwick, Dodleston, Aldford, Pulford, Shocklach, Oldcastle and Malpas. The earthworks of Malpas Castle are still to be found to the north of St Oswald's Church.

Malpas became more important when the western hundreds of Cheshire were detached to become part of Wales. By the late 1200s, Malpas became the most important settlement in the southern part of Broxton Hundred. Malpas was granted a Market Charter for a weekly market and annual fair in 1281.

The present church was built in the second half of the 14th century on the site of an earlier one, of which nothing remains. However, there is a list of earlier rectors. Extensive alterations were made in the late 15th century. The roof was removed, the side walls reduced in height and rebuilt with the current windows while the nave arcade was raised to its current height.

The town retains its general layout established in the mediæval period. A possible reason for Malpas not undergoing intensive development is that Whitchurch, a major market town, was just 4 miles away.[1]

The seventh son of Sir Randolph Brereton of Shocklach and Malpas, Sir William Brereton, became chamberlain of Chester, and groom of the chamber to Henry VIII. He was beheaded on 17 May 1536 for a suspected romantic affair with Anne Boleyn. These accusations may have been politically motivated.

Cheshire was strategically very important during the Civil War as it controlled the north-south movement of troops from the west of the Pennines to the east of the Clwydian range. Chester, as the main port to Ireland was supremely important as King Charles had an army there. Another Sir William Brereton of Malpas and Shocklach was one of two Parliamentarian Generals responsible for the defeat of the Royalist Irish reinforcements at the Battle of Nantwich in January 1644 and later the siege of Chester, capturing it in February 1646.

In 1940 during the Second World War, the Czechoslovak Army in exile was encamped in Cholmondeley Park.