Willington Worthenbury is a civil community in the Maelor detached part of Flintshire, adjacent to the borders with Cheshire and Denbighshire.

Settlement at Worthenbury may have begun as early as the tenth century. The name Worthenbury may stem from the Saxon name for a stronghold 'burgh', indicating that a fortification may have been situated there. There has been a parish church in the village since at least 1388. The current building was built in 1739; it is dedicated to Saint Deiniol and has many Georgian features.

South of the village lay Emral Hall, home to the influential Puleston family until 1936 when it was demolished. 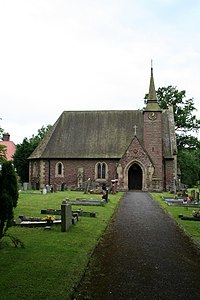 Tallarn Green also has a small church, completed in 1873 and dedicated to Mary Magdalene. The famous poet R. S. Thomas was curate here in the 1940s. The churchyard contains the war grave of a Manchester Regiment soldier of World War I.[1] The word "green" in the name of the village indicates an area of grassy common land.

This Flintshire article is a stub: help to improve Wikishire by building it up.
Retrieved from "https://wikishire.co.uk/w/index.php?title=Willington_Worthenbury&oldid=45137"
Categories: