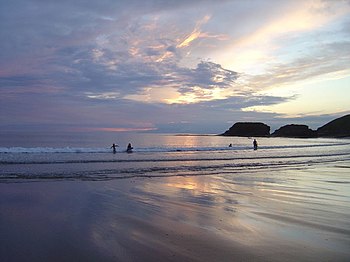 Donegal Bay is an inlet or bay in the northwest of Ireland, its shorelines shared between three counties: Donegal to the north and west, Leitrim and Sligo to the south. The mouth of the bay opens into the Atlantic Ocean.

The town of Donegal stands at the head of the bay, where the River Eske enters it.

Donegal Bay is reckoned Ireland's largest bay, and also contains the highest seacliffs in the Province of Ulster at Slieve League, which tower 1,972 feet above sea level.

The scenery around the bay is one of variety and beauty, with cliffs, crags and broad, sandy beaches. It is then a popular place for holidaying.

More grimly, Donegal Bay was the scene of the assassination of Earl Mountbatten of Burma, whose unguarded boat was attacked with an explosive by IRA terrorists in 1979.

The bay is part of a much larger geological feature: the Great Glen Fault. This fault line in the Earth's crust runs in a straight line through Inverness-shire from sea to sea, forming the Great Glen in which lies that county's great lochs, the largest and most famous being Loch Ness; it continues south-westwards across the sea though to Ireland, its path marked by Loch Foyle, Donegal Bay and Clew Bay (County Mayo).

Donegal Bay's beaches have some of Europe's finest surfing, caused by a combination by a direct west-facing location and the funnel-shape of Donegal Bay (the westerlies of the Atlantic Ocean get funnelled into a relatively small area, which increases the size of the swell). Rossnowlagh and Bundoran are recognised by the European surfing community as among Ireland's finest surf beaches with good facilities and excellent water quality.

Towns and villages on the bay

On the shore of Donegal Bay may be found towns and villages including:

Rivers that empty into the bay include:

Islands in the bay include: