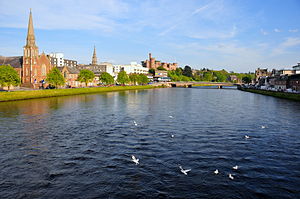 The River Ness in Inverness 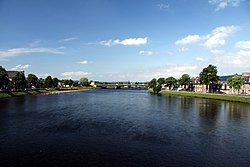 The Ness in Inverness

The River Ness is a river of Inverness-shire flowing from Loch Ness, north to the City of Inverness and to the Moray Firth. It gives a name to Inverness, which name is from the Gaelic Inbhir Nis ("Ness mouth"). The river is 7 miles long from loch to sea, but notwithstanding its short length, it is the outflow of much of the water draining to the Great Glen and in Inverness it is a broad and noble river.

On a hill above the river in Inverness stands Inverness Castle. The river is overlooked by the Eden Court Theatre, the largest theatre in the Highlands. Inverness Cathedral also stands by the banks of the River Ness.

Inverness draws many tourists and there are many large hotels along the river. There are several bridges in Inverness which cross the River Ness. The Greig Street Bridge is a picturesque suspension bridge fabricated in Inverness in 1881. Upstream of Inverness town centre lie the Ness Islands which are very popular for nature walks and they possess many fine tree specimens. The river flows through the heart of the City of Inverness and fishermen in waders can often be seen casting for salmon. Seals are often seen as are herons, bats, house martins and diving birds. The banks of the river are lined with lime trees. The Port of Inverness is situated at the mouth of the River Ness where there is also a recently constructed marina offering mooring for private yachts and other vessels.

Adamnan wrote that Saint Columba encountered and calmed a fearsome beast in the waters of the River Ness in AD 565[1][2] which is the origin of the legend of the Loch Ness Monster.