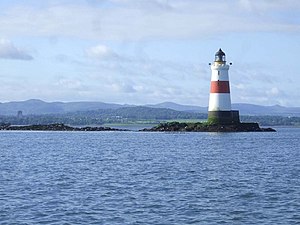 Oxcars is an island in the Firth of Forth belonging to the parish of Aberdour, Fife. It is little more than a rock of just over an acre in size measured at the low water mark of the spring tide and dominated by the Oxcars lighthouse.

The current lighthouse was built by David and Thomas Stevenson and was lit on 15 February 1886. It was originally maned with two keepers, but in 1894 it became the first of the Northern Lights to be automated using a clockwork timer. The light was operated using gas delivered weekly from Granton Gasworks on the Midlothian mainland. The attending boatman delivered the gas and wound up the timer each week.

The lighthouse was originally operated by the Northern Lighthouse Board but is now operated by Forth Ports Authority.